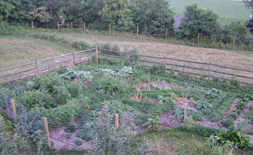 In 1997, with one business partner, Phil Williams started and grew a mostly residential landscape construction and maintenance company from $0-$5 million plus in revenue in 8 years.

They sold the company in early 2008′ because Phil felt they were riding the housing bubble, but also because he felt the business model was unsustainable.

After that Phil went to weatherization trade school and became an energy auditor, building analyst, and a weatherization contractor.  He learned a lot about efficient building and retrofits, but really he just wanted to spend time in his garden.

Phil got hooked on permaculture in 2011, and obtained his PDC in 2012, and has been working on his own permaculture design site for the past 2 years. Phil has been documenting the process on his site which is FoodProduction101.com

Phil joins us today to discuss how to create a profitable business installing and maintaining permaculture gardens.

Join Us As We Discuss…