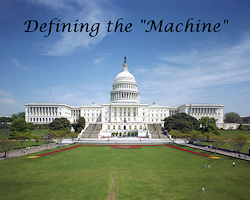 Fact – Every new member of the House and Senate arrives for their first day of work already in debt to their own party.

I wanted to discuss this today but my voice made me cancel the show.  Anyway I told you that this was true for a long time.  Sure you can hold the line on a few things with democrats or republicans in the House and Senate but nothing will ever really change in the current system.  I have my own reasons for this claim, it is mostly about funding and that is the key, though I just learned the final piece of the puzzle in New Hampshire.

In NH at Liberty Forum I met Patrick Barron, founder of the website “Defining the Machine” and he completed the last piece of the puzzle for me.  I recommend you go to this site and go through all of it but here is the short version of how the House and Senate run today.

Well the day you show up a senior member of your party, (RNC or DNC matters not) and the first thing they do is to basically hand you a bill, a bill for party dues.  You will be told this is “voluntary” but you will get no committee assignments, no seats, no shit, nothing unless you do it.  Your first bill will be small say 100,000 dollars and they will even send you to a nice desk and give you a list of numbers to start calling.  Raise your 100K and you can get on some sort of minor steering committee or something like, now at least you can submit amendments to some things.

You won’t be introducing major legislation though, oh no you will have to raise (or often personally donate) a lot more money for that privilege.   Yes my friends the seats and chairmanships of all the committees that get bills on the dockets are bought and paid for by the very members on them.  If you don’t pay your “dues”, you get nothing, you get frozen out.  All you can actually do at that point is show up for floor votes.  No one is going to work with you, you can’t introduce any bills, you can’t really object to them either other then on the final votes on the main floor.

In effect all freshman Representatives and Senators show up IN DEBT to their parties, this includes even rouge candidates that the party worked against actively in the primaries and hung out to dry in the general election that still managed to get elected.

So if you still think sending the right people to Washington is the answer I ask you how?  How can we get anything meaningful changed with this system.  This system by the way isn’t hidden, this isn’t conspiracy talk it is out in the wide open, it is just that no one talks about it.

Those of you still tuning in to Left or Right wing radio should call those hosts and ask them why this is never discussed in their little left/right false dichotomy illusion.

This is just one more reason I founded “Walking to Freedom“, notice the initials for it are WTF.  We are now at a point where only the states themselves are strong enough to stand up to the continuous onslaught of Federal insanity and my friends firing congressmen is likely still a good idea but it won’t change anything.

I feel it is now time to choose a liberty oriented state you most align with, go there (stay there if you are there already) and work at the local and state levels.