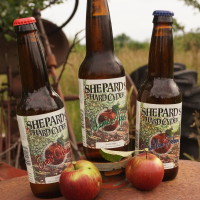 Mark Shepard is one of my true heroes.  He established New Forest Farm over 15 years ago in the heart of “corn country”.  Today it is the best example of a large scale, profitable, operating Permaculture farm in America.   Mark’s work in fact is a big factor in inspiring me to establish PermaEthos and our farm in West Virginia.

The key though with a new farm model is building new markets, that is something Mark is working on right now.  Apples at one time were an American way of life and most apples were grown from seed at that time.

Trees of the time produced a wide assortment of apples.  The best were used for direct consumption or baked goods, many were made into vinegar as a preservative in the days before refrigeration but a ton were made into cider.

While some was drunk fresh the bulk was fermented into hard cider, something I dearly love.  Today there is a trend in hard cider but most is still made from fruit sprayed with chemicals.  Mark is working to establish Shepard’s Hard Cyder as a truly chemical free and sustainable example of the craft cider market.

Growing and proving out a market like this is good for all producers.  Apples today are considered hard to grow without chemicals and even sustainable food advocate Lee Reich author of “Grow Fruit Naturally” said on my show that “apples are not worth growing east of the Rockies“.

Again the truth is Apples were once grown in most of America, why do you think the saying “as American as apple pie” exits.  Mark is growing apples from seed in Wisconsin and I am doing it in Texas, that is a pretty good example of how widely adapted apples can be.

When you grow from seed though you get a lot of cider quality apples.  One can only drink so much cider one self though.  Well what if a major craft industry can be spurred on, that is already happening in America, Reuters just published an article titled,  U.S. shortage of ‘spitter’ apples threatens boom in hard cider.  However there is a lot of growth yet to be accomplished in the craft cider market.  Imagine the impact on farming craft cider could have if it were to grow to even half the size of the currently booming craft beer industry .

The truth is using permaculture and Mark’s restoration ag model we can produce tons of apples almost as a byproduct of farm activity.  Growing this industry will make that a viable option for more farmers.  One thing we need on farms today is more trees, if you want farmers to plant trees make it profitable!

Personally as a business man working hard to grow permaculture I will back anything I can that will help grow the industry.  But Mark has already done so much for the industry that my decision to back him was instant.  So I made a contribution to Mark’s IndieGoGo Campaign.  I am asking members of the TSP community to consider doing so as well.  You can donate as little as a dollar or spend say 25 bucks and hey Mark will plant a tree in your honor on his farm at that level!

I personally donated at a level were my name is getting engraved on one of the fermentation tanks, which I think is cool as heck!  I will now have to make it a huge priority to get to Marks farm and see the cool work he is doing.

Anyway consider chipping in a few bucks to help one of our true pioneers get this new initiative off the ground.  They say a rising tide floats all boats and so much the better if the tide you are floating on is worthy of a dip of your mug and raising it in good cheer.

In Mark’s words, “Shepard’s Hard Cyder’s message is one of ecological improvement through cider, and strong local economies through strong drink! ”

Check Out Mark’s Initiative at IndieGoGo