Today we delve into the misunderstood world of airsoft.  I think airsoft has an unfair and undeserved stigma among many of the “tactically minded” due to the majority of enthusiasts being gamers.  While I have no interest in the game aspects of airsoft I feel even this community is misunderstood and many unfair assumptions are made about them.

Today though I will focus on what I call “Airsoft for Practical Training”.  By that I mean real world training that benefits the average civilian that either carries a gun for defense or keeps a gun in their home for the same purpose or both.

While I love things like IDPA and IPSC shooting and I have great respect for the many tactical training schools like my good friends Frank Sharpe Jr. and James Yeager run, or even the big time schools like Front Sight provide, I don’t find what they teach particularly valuable to the average guy with a job, two kids, wife and a dog to protect from a group of thugs or an armed intruder in the middle of the night. 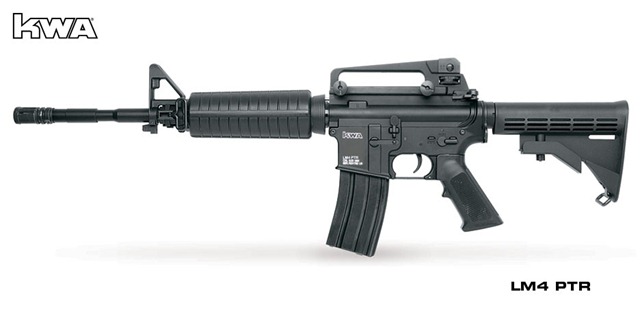 The KWA LM4-PTR is a “Professional Training Rifle” Designed for Military and Police Training with Airsoft.

Join me today to discuss…

Some Good Low Cost Guns and Accessories on Amazon – Like I said on the air I had lousy luck with the few people offering GBB guns on Amazon, use the stores above for that.  But here are some things you can get on Amazon.