Today is an episode of TSP Rewind, commercial free versions of past podcast episodes. Today’s episode was originally Episode-1422- Turn Off The Fricken News and was originally published on September 9, 2014.

I have to tell you guys I have made the mistake recently of looking at main stream news for more than 10 seconds a day, it has my brain ready to ooze out of my eye sockets! The level of ignorance the typical American is capable of is now at an all time high in my view.

There is but one goal of all this, divide the people and put them in a state of fear. The lies are numerous. Such as the upcoming election is critical, Isis is in Houston and poor little children will be deported if we don’t do something soon. 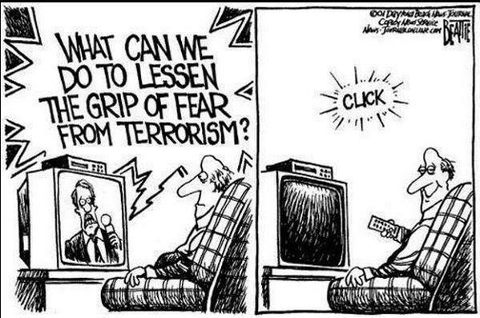 Can it really be this simple? Yep!

Of course now the congress is weighing in on the domestic violence committed by an NFL player. If you think this is a good thing, let me ask you this. How many scum bag men punch women in the face every day and these clowns don’t care about it at all? Why do you think they care now?

Women do you think any of them would speak up for you if you were this victim but they could not grand stand it? Further how many of the thieves in our government likely commit such abuses in their own homes?

Please listen today with an open mind, the entire media message right now is a simple coordinated effort to confuse, anger, divide and place our citizens into a state of fear and capitulation. The worst part is it is likely to work, there is nothing to be done at this point to stop it. So you much see it for what it is, understand it and design your future around it, vs. as part of it.