Today is an episode of TSP Rewind, commercial free versions of past podcast episodes. Today’s episode was originally Episode-2445- 14 Myths and Misunderstood Topics and was originally published on May 23, 2019.

Time for a bit of a myth busting show today. There are so many things people are sure about, that just are not the way they are sure they are. Take the argument, “America is not a democracy”, we will shred that one today. How about “I am not an atheist, I am an agnostic”, the problem there is one of those words does not mean what most people think it means.

Some may say why bother with a show like this? My view is one of the chief ways we are kept divided by the power elites is to make sure we have dichotomies, generally false ones. To do this they sow a bit of disinformation, present the extreme cases on both sides, change the meaning of a few words and sit back and let us act like the fools they expect us to be.

Imagine you are tying to talk to a person, they speak say Ukrainian and you speak English. Well at least you know you

don’t understand each other. But what if you speak Russian, a very similar language to Ukrainian. You are not a native speaker of Russian but you are pretty good, you can talk to Russians and have almost no problems being understood or understanding them. Now you meet a Ukrainian, he doesn’t tell you he is Ukrainian, you don’t tell him you are speaking Russian.

In time you would likely figure it out, but until then might you have some major disagreements just because a word you know, doesn’t actually mean to him what it means to you? It is like that only worse with many of the things we will talk about today. And it might just be if we can mean the same thing, when we say the same words, we can have more productive discussions, especially when we disagree about something. 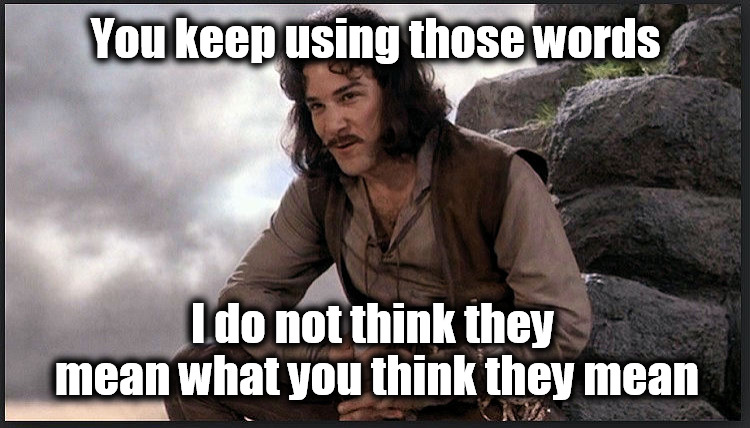