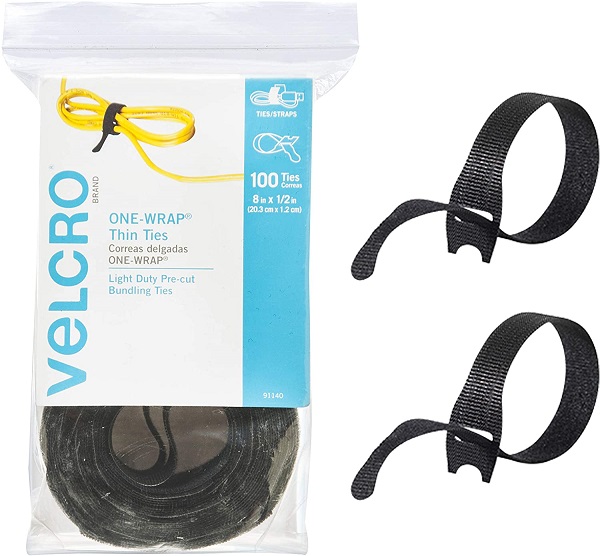 Today’s TSP Amazon Item of the day is Velcro Brand ONE-WRAP Cable Ties.  Okay so mostly these are used for their intended purpose, which is managing wires and cables.  They are great for that and easy to remove when needed and put back on.  Of course I have been recommending Reusable Nylon Zip Ties for years as well and those are great for many things these cloth ones are not so good for.

When it comes to wire management under a desk or behind a TV though I find these ones far superior to rigid nylon ties.  That said this common use is pretty self explanatory and well understood so I won’t say anything more on it, you know if this is going to be of benefit to you.

But what about using them for fishing?  There are three really great uses for them for fisherman and two you have likely never heard about before today.

Let’s start out with the most common one, binding rod parts together during transport to prevent breaks.  Today “rod bands” are all en-vogue for this and I guess if you are running 25,000 dollars worth of gear in a 80,000 dollar bass boat fishing tournaments for a living that makes sense.  For me at 12 bucks a hundred these do everything a rod band does and as you are about to see more.

First though I want to talk about broken rods and the reviews that mention them.  If you look up almost any rod on Amazon in the reviews you will find a few 1 star angry reviews saying it is a “total piece of junk” and “broke for no reason”, etc.  Sometimes these are just idiots who did something stupid like even my online buddy Brant who is a pro is not immune to (see that here), but often I do think they really did seem to have a rod break for no reason, not one they could see anyway.  Before I go on this is true for low end Shimano rods and high dollar St. Croix and everything in between.

Modern rods are really strong and unless you are casting well beyond their weights they are unlikely to break with normal use.  However they have a weakness to side stress.  Often a side ding will create a small fracture that will not even be evident, later you use it and stress opens the fracture and crack.  Same thing for instance when there is a hair line crack in a glass you don’t see and you run warm water over it to wash it.

The best thing you can do to prevent this is take rods apart during transportation, and bind them together.  Yea a rod case is even better but if you use a lot of rods and fish often they are a pain in the ass and so you don’t use them.  Now here is the trick, don’t do it the way everyone else does it with the thin rod tip and the thick base in the same direction.  Instead flip the top part so the thinnest and weakest part lays against the rod handle.  Now take 2-3 (depending on rod length) of these ties and bind the rods together.  Now the weakest part of the rod is against the strongest and the handle material (cork or foam) acts as padding.  If this saves ONE rod for you that pack of wraps pays for itself say 3X over for a cheap rod and many more for a good one.

Next up, preventing tangles!  Years ago I fished with a guide friend for stripers.  He had a 8 rods rigged up for live shad fishing.  That means a swivel and a sliding weight.  All the rods went into the cannon rack on the T-top of the boat.  I have to say it looked really cool too!  Off we went and the conditions were rough, when we reached the first fishing spot the first thing the guide did was spend 15 minutes untangling the rods.

Those weights bounced and twirled round and round, making a mess.  We had a great day anyway but I told my friend to simply get these wraps and bind the lines to the rods when rigged like this or anyway similar where a weight could swing.  He waved it off but the next time we fished there was a wrap on every rod.  He said the following…

Pros don’t like to be told what to do but we really do listen, I have to say that in 20 years of guiding this is the single most useful tip a customer ever gave me.

Next is the evolution of something I am pretty sure I invented that I used to call the rubber band trick.  As many of you know I switched to all “bait feeder” reels a few years ago and love them.  I will never buy another reel without it again.  But I own a lot of older Mitchell and Diawa reels and won’t be getting rid of them either.  Bait feeders have two separate drags, the feeder drag can be set light so the rod can be in a holder with a tight line but the fish can take it and run.  You pick the rod up, turn the crank and the fighting drag engages.

Growing up in the 80s though I fished with my uncles and mostly we were using at the time 20+ year old Mitchell 300s.  Bait feeders are pretty new and we sure did not have them back then.  So when bank fishing we used the “pebble trick”.  Cast out, set your rod in a holder (usually a Y branch you cut from the brush), get your line tight like you want it, then open the bail and use a pebble or anything say a casting weight to hold the line to the ground keeping it taunt against the spool.  Now a fish can take line and run but the line stays tight so you see hits and more important the wind doesn’t cause tangles.  Well, until it does!  See that one good gust of wind pulls the line out from under that rock, usually when you are say opening a beer, by the time you get back, you have a mess at worst or may be missed a fish.

Seeing this as a kid I got an idea, I put a rubber band in front of my reels.  The uncles at first scoffed!  What I did though was pretty slick, I again got the rod set in the holder, then pulled the line under the rubber band, then opened the bail, it is almost fool proof and if windy you just pull a little more line into the loop.  I ended up with high praise and the “rubber band trick” became really popular in the coal region of PA for a while.  This is cool because fishing at night for cats you can usually even hear the line pull out on a hard hit.

Anyway when I started using these wraps for other things I remembered that old trick.  So when I put a rod together I put the bands just in front of the reel, so that way they are there when I take it back down.  But when fishing with a reel that is not a bait feeder and tight lining I just tuck the line under the tie wrap.  Works every bit as good and unlike the rubber band it doesn’t break down into nasty goo and mar up your rod over time.

I am sure there are many other uses you can think of for these things and the price works out to about 12 cents each so when, (not if) you lose some, you won’t really care.  That price is about 12 times less expensive than “rod bands” by the way and rod bands are unitaskers.  I despise unitaskers!  I also use these say for stored extension cords and other similar applications.  Oh and if you are the super organized type you can color code stuff with three options, black, gray and red.

So check out Velcro Brand ONE-WRAP Cable Ties today, at 12 bucks and change per 100 they are a great multi tasker to have around.  Just like the reusable nylon ones, store a bundle in your go bag, your glove box, your tool box, etc.  You will never regret it, trust me.