So we were out of town over the weekend and just got in last night.  The dogs and one of the cats were boarded as always when we leave.  Fortunately our vet/boarding service is across the street from the office.  Anyway we woke up to about an inch of snow this AM it was just pretty and I didn’t expect it would effect the morning commute much.

My plan was to go into the office, record today’s show, take care of customer service and then pick the boys up from across the street.  Well, by the time I got to the office the flakes had turned to ice pellets.  Driving in snow isn’t a big deal to me but ice is another story.  So I simply picked up the mail and went and got “the boys” and came on home.

I could record a show from  home (likely I will) but I can’t do all the editing and specifically the publishing of the big audio file from home.   So no Monday show today.  Sorry guys/gals but I have a wife and family to look after, I don’t screw with the weather.

Dangerous Conditions for Birds Too 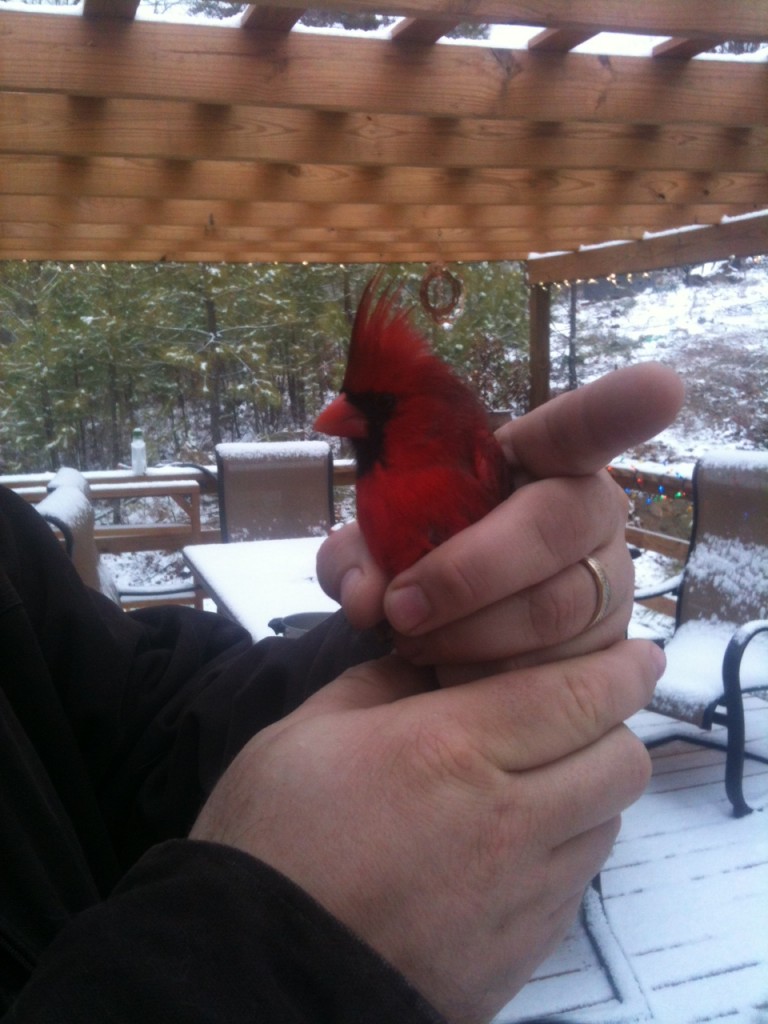 We Named this Guy "Crash" and After a Few Moments of Recovery Sent Him on His Way.

No I haven’t cracked the code for talking to animals the poor guy just had his bell rung so hard he didn’t know he was being picked up until I had him in hand.  I guess the flying snow in combination with the snow on the ground and the way the light was hitting the front glass door confused him.  When I got back to the house this little guy was lying in the snow in front of the door.

I scooped him up for a few pictures.  He came around quickly enough and snapped a gasket when Dorothy tried to pet him.  That told us he was going to be okay.  He flew off and sat in a tree for a bit and seemed to recover just fine.  Good deed for the day done!

Since I will be holed up at the homestead, with the dogs, a roaring fire etc. it is a great day for me to do some research and outlines for future shows.  So if there has been a topic you want to hear about suggest it in the comments below and I will try to get a show on your subject in the queue.

I really want to do some more firearms related shows.  So if you have any ideas on that let me know.  I planned to do one soon on “small bore shotguns” like the 28 gauge and 410 bore.  Don’t limit yourself if you always think to yourself “Jack really needs to do a show about _____” today is the day to let me know about it.

Why Not Listen to a “Blast from the Past” Today?

While I don’t like missing even one day of TSP there are over 1,000 hours of on demand programming available to you 24-7-365 so why not just pick one and random today.  Or to help in this matter I have selected three all time favorites below you may have missed the first time around.