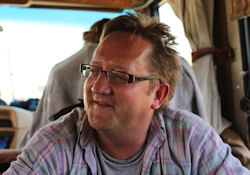 Titus During the Filming of “Bailout”

John Titus is a lawyer, licensed before the U.S. Supreme Court, who’s practiced patent litigation for over 15 years. In 2011-12, he took a break from his practice to make a feature-length film, Bailout, about the real cause of the financial crisis: criminal fraud.

The film features interviews with truth tellers Dylan Ratigan, Karl Denninger, Chris Whalen, Yves Smith, Sheriff Tom Dart, and others. He is now working on a TV-safe version of the film to be released later this year.

John joins us today to discuss what actually caused the financial crisis because it isn’t what the TV told you.  Why he went to the expense and trouble of making a film.   What distinguishes Bailout from other financial crisis films and the direct cause and effect relationship between Wallstreet elites and the crisis.

I think you will be intrigued when I ask him how many bankers should be in jail a you hear the math behind his response.  We also will discuss how this crisis will end and the sad answer can be summed up as bad or worse.

Before becoming a lawyer, John worked as a circuit designer for motors used on the Space Shuttle and space station. He was a free market Republican until the party betrayed itself as a total sham in 2008 by getting TARP passed.