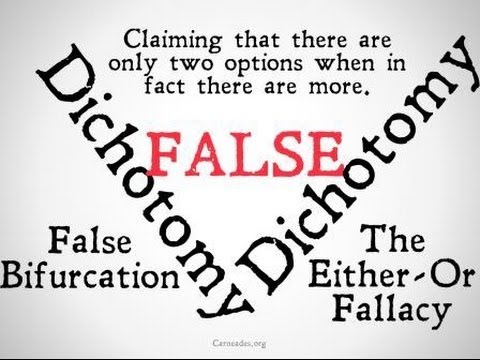 Occasionally I mention the “false dichotomy” but I have not done a full episode dedicated to it since Episode-874 back in April of 2012.  That is more than 5 years ago!  Since that time many of my positions have evolved but the basic concept of the false dichotomy remains.

I have been thinking about this a lot lately and nothing more clearly illustrates it than this common scenario.  I will post something on say facebook along with my opinion.  In that ONE SAME post upset people will attack me for my view in the comments.  That alone means nothing but here is where it gets interesting.

Or some such version there of!  Isn’t this ironic?  That two people that literally hate each other, will both hate me and accuse me of being the other side that also hates me?  I ask you does this make any logical sense?  No it doesn’t, until you approach the question from the right angle, when we ask why this happens, vs. simply if it makes sense, it actually makes perfect sense.