Editors Note – Today’s article was authored by John Pugliano.  Given Mr. Pugliano is a regular contributor to my podcast and literally wrote to book on the coming automation wave (The Robots are Coming: A Human’s Survival Guide to Profiting in the Age of Automation) I decided to ask him to write this one.  He graciously accepted.
.
This is the fourth article in this series. The main concept to remember as you move through it is that each of these articles focuses on one “mega trend”. These trends were already in motion before CoVid appeared, what has now happened is due to CoVid they have been accelerated and much of what was going to take about a decade to play out, will now most likely play out in 2-3 years.
.
For more on this please read Part One of this series if you have not done so yet as it will provide context which I have chosen to not repeat in this article. The entire series as it is released can be found here. Also as you will soon see each of these trends are interrelated and each magnifies the effects of the others. 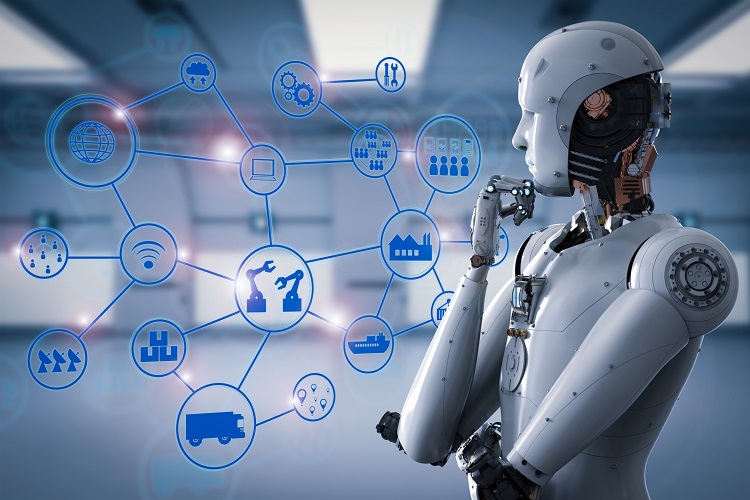 Automation is a mega trend which will unquestionably impact the economy, either for good or bad.  I have argued that the likely outcome would be positive, as long as the adaptation was slow, allowing the human workforce and culture to adjust.  However, the economic and societal consequences could be devastating if implementation occurred too rapidly.  CoVid might be the black swan event that triggers an economic crash initiated by the accelerated use of automation.

Automation is a broad term and for the purposes of this article, I’ll use it as a synonym for robotics, artificial intelligence, the internet of things, cloud computing, mobile apps, 5G integration, digitization, bioengineering, etc.  Automation is a tool, it is neither good nor evil.  History is rife with examples of automation being implemented both beneficially and poorly.

The automobile was a relatively benevolent application of technology.  Yes it displaced the horse and buggy, but human labor was still needed to manufacture and operate the car.  In fact, automobiles dramatically increased the need and usefulness of humans.  More jobs were created than destroyed. 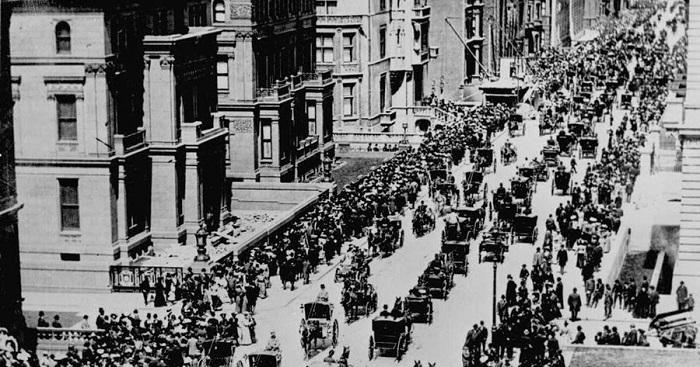 Contrast that with the experience of the Luddites, who were 19th century English cloth weavers.  They were the skilled and middle class of their day; however, Luddite jobs were famously displaced by the industrialization of the textile craft.  Long term industrialization was a net positive for the economy, but short term it had devastating effects on the Luddites.  Their stable middle class lifestyle quickly degenerated into rioting and destruction of the automated textile mills.

The significance of Luddite civil disobedience is always on the minds of the Elite Establishment. Considering the consequences of the rapid adoption of automation, Jeff Bezos said, “It’s probably hard to overstate how big of an impact it’s going to have on society over the next twenty years.”  Elon Musk believes that so many jobs will be destroyed that a universal basic income will be needed to compensate the unemployed masses.  Bill Gates thinks the advance of automation should be throttled and robots should be taxed.

These statements were made pre-CoVid, before Zoom and work-from-home because common usage.  CoVid is rapidly advancing the adoption of automation.  Pulling forward technology that would have otherwise taken years to progress.

Most people fail to realize that the bottleneck of automation usage isn’t limited by technological sophistication.  The job-killing technologies that will make human labor unnecessary already exist.  The technology is functional and available; however, its advance is being delayed by social norms and regulatory barriers.

For example, self-checkout technology isn’t new, but its implementation has been hindered by uncooperative shoppers.  Likewise, telecommuting and work-from-home technology has been in existence for decades, but its adoption has been stalled by employers wanting to keep close proximal tabs on their employees.  These types of social norms have been a deterrent but the real draconian drag has come from government and industry regulations.

But CoVid is breaking down both the social and regulatory constraints on technology.  The shutdowns have empowered decentralized home based productivity.  Employees are working from home, students are learning from home, and even the sick are healing at home.  CoVid is rapidly advancing the adoption of automation because it’s literally providing everyone the opportunity to “test drive” technology from home.

This is all good news from a productivity and efficiency perspective.  For example, fossil fuel consumption has been severely curtailed.  That’s good news for the environment and good news for the family budget.  But benefits of automation come at the expense of someone’s earning capacity.  The threat exists when there is an unbalance between the destruction of old jobs and the creation of new ones.  CoVid is killing the dying jobs before new opportunities arise.

It’s important to realize that the negative consequences of automation won’t be limited to a few sectors of the economy, everyone’s job will be at risk.  For example, consider the vulnerability of the medical industry.  Although its employees are highly skilled and although it’s generally insulated from outside competitive forces, the barriers protecting the medical establishment are being breached by CoVid.

Prior to CoVid, telehealth care was largely discouraged due to government regulations.  Things like privacy compliance, insurance compensation limits, and legal jurisdiction all got in the way.  Issues that were bottlenecking the system for decades have suddenly been deemed irrelevant to deal with the CoVid crisis.  Again this is a mega trend, it was already happening, it was simply impeded by checks in the system.  The chart below shows the growth in the sector up until 2018, long before CoVId even existed.  Just imagine what will happen to this trend by the end of 2020.  In fact the article where I found this graph ironically shows the attempts by the industry to impede its progress. 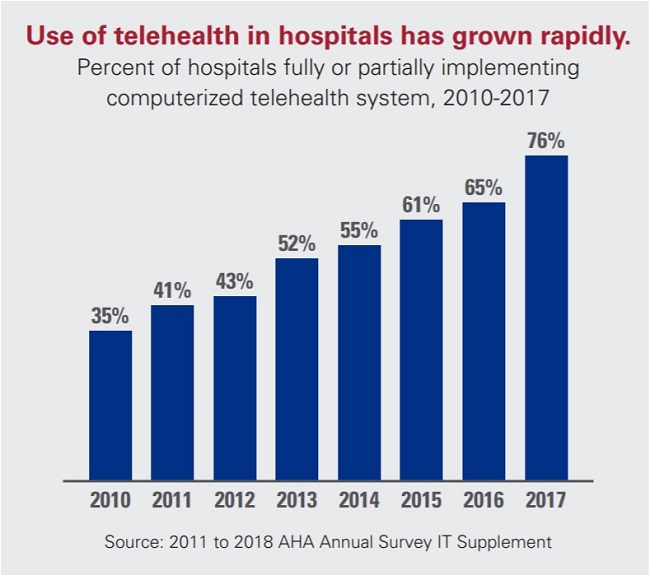 If this momentum continues, fast forward to a future where telehealth and automated health expert systems are encouraged.   Off-the-shelf technologies already exist, they’re just not being utilized.  Imagine the possibilities.  Fitbits and Apple Watches replacing electrocardiograms.  Algorithms (CheXNeXt) that can read chest X-rays better than a radiologist. Robotic assisted surgery systems (Da Vinci) that could be operated by a Navy Medic with a home school diploma.

Consider the impact technology will inevitably have on the medical industry, affecting doctors, nurses, techs, staff, administrators, insurance companies…literally EVERYONE in the system.  And it’s a huge system that employs at least 13% of the workforce.  Employees that are highly skilled and extremely well compensated…yet their jobs are in danger of being made redundant by automation.

Here’s the key takeaway, automation is a threat to all jobs, not just low skilled workers.  In fact, I believe the hardest hit will be the professional and white collar worker.  This is because simple tasks have already been automated.  Repetitive assembly line work is already done with robots.  Next in line are the cashiers, hamburger flippers and baristas.  Soon to follow will be the professionals and midlevel managers that will be replaced by expert systems and enterprise software.

Any job that is predictable and routine is in danger of being automated out of existence.  No occupation is safe.  CoVid is making the transition quicker.  Recently, billionaire investment manager Jeffrey Gundlach observed that during the CoVid shutdown, while his staff were working from home, he’s had less interaction with his midlevel managers.  He quipped, “I’m starting to wonder if I really need them.” 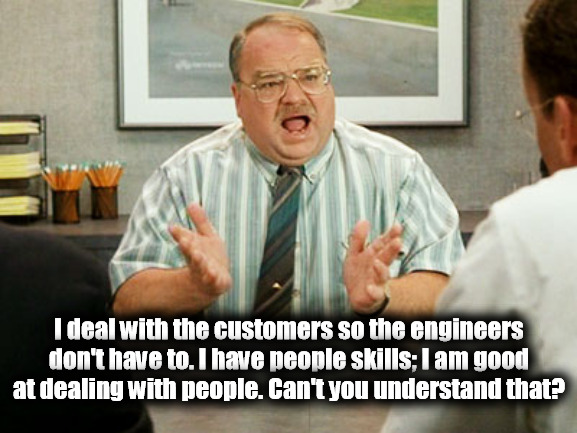 One final thought.  Automation will impact those that are least likely to adapt.  I think GenX will be disproportionately hurt.  The Boomers will be less susceptible because they’re already retiring from the workforce, mostly with secure pensions or retirement savings.   The Millennials and GenZ are tech savvy and young enough to mostly adapt.  But GenX is right smack in the sweet spot of destruction.  They’re too old to retrain, and unlike the Boomers, GenX never reached their peak earning capacity.  Like the laid off Rust Belt worker from the 1980s, I think many members of GenX have a bleak future.

And just when you thought things couldn’t get worse…this is not a U.S. phenomenon.  Europe and Asia will likely fare worse.  China is essentially a nation of GenXers, their system is doomed by automation and its implosion will likely collapse the global economy.  CoVid is once again killing the dying, in this case by accelerating the spread of automation.

Guest post by John Pugliano, who is the author of The Robots are Coming: A Human’s Survival Guide to Profiting in the Age of Automation, a valued member of The Survival Podcast Expert Council and the host of the Wealthsteading Podcast.