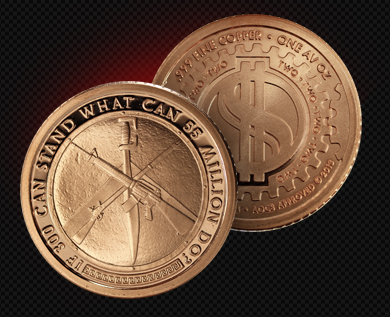 This Copper Round Will Be Minted Once Only and Can’t be Purchased at Any Price.

We are almost there, less then 200 Sentinels need to be sold now until all orders get a free limited edition copper round.

Frankly it is pretty much a done deal at this point and the copper is a lock and stock guarantee.  In fact I am going to make this promise to you guys.  Should by some freak event we not hit 5,000 coppers by Sunday evening I will personally buy at full retail the differential and make sure you guys get these copper rounds, because hey, hell I want one too.

The Sentinel Round has taken the world quite literally by storm.  While it doesn’t count for our direct sales in this contest Bullion Bourse in Australia just ordered 1,000 ounces so TSP’rs in the land down under, yes, the Sentinel is coming to Australia.

We are working to add more international dealers to the list and Provident Metals will also be carrying the Sentinel in the US Market.  We set out to do something unique, something with huge impact and something that has never been done before with the Sentinel round and we pulled it off, with your help of course.  Selling 5,000 plus ounces in 4 days gets the attention of silver dealers all over the world.  Selling out a Limited Edition in 7 hours didn’t hurt either.  Again thanks to all of you who have helped make the Sentinel into such a great success.

Update – This Promotion Has Expired