I am going to ask you to do something people seem to have a hard time doing anymore.  That is to understand the facts about something controversial before forming an opinion on it.  While that seems like a reasonable position it has been relegated to obscurity in modern times.  Take for instance the current controversy about Boy Scouts of America letting girls into Boy Scouts.

Ever since Boy Scouts of America announced that they will allow girls to be part of scouts, the internet has been manic with criticisms.  The problem is most of this criticism is totally divorced from reality.  This often posted meme is a perfect example, I must have seen it 50 times in the last week… 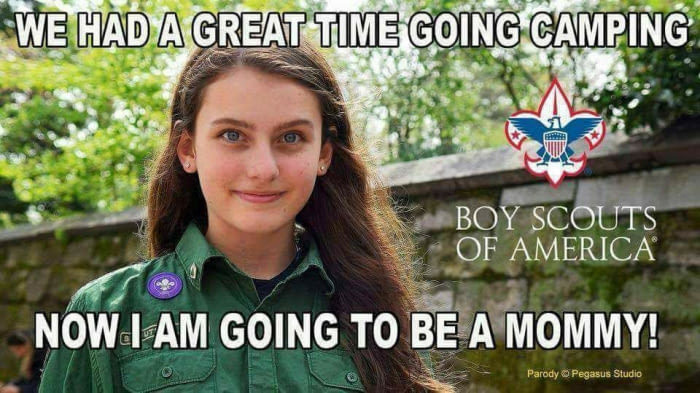 Now this meme is stupid on its face, as it infers that if you let boys and girls do things together girls will always get pregnant.  We could continue this line of objection and point out how scouts teach morals, are far more supervised than most other activities boys and girls do together every day, etc. but we don’t even need to.

This meme is based on a total falsehood, the concept that boys and girls will even be engaged in activities together in scouting.  This at least as it relates to this “big change” it totally false.  To understand that please see this organizational chart below, then we can further discuss this like reasonable and logical people, at least that is my hope. 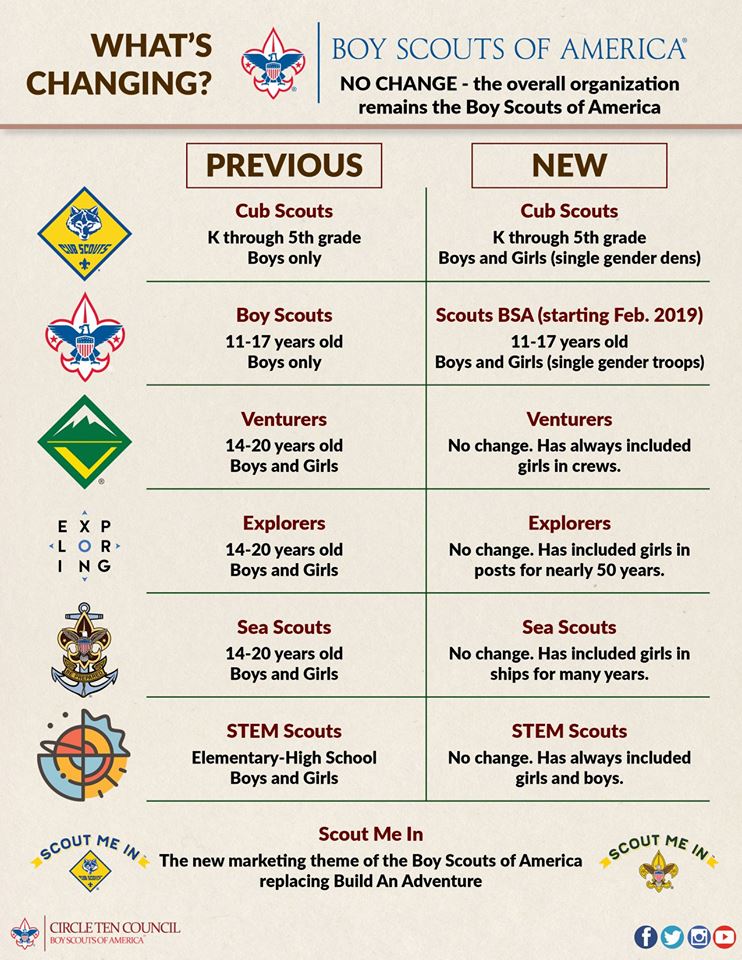 So let’s start off with something most people seem to not understand.  Those nice young men in their uniforms helping grandma across the street were not members of “Boy Scouts of America” (here after referred to as BSA) but rather “Boy Scouts”.  BSA is the main organization which manages all six scouting organizations under them.  As you can see this change doesn’t even affect four of these groups, those being Venturers, Explorers, Sea Scouts and STEM Scouts.  The first three are engaged in many outdoor activities and they are 100% coed and have been so for over half a century.  I’m going to go out on a limb and say that teen pregnancy in those groups is likely a lot lower than the national average.

However, the bigger issue here is under this new system in Scouts BSA (new name for Boy Scouts) and in Cub Scouts girls and boys won’t even be in the same groups.  They are remaining gender separated and for good reason.  That reason is one big purpose of Boy Scouts is to put young men around adult men and do good stuff together, hence modeling solid male behavior to create a new generation of good young men.

So BSA has LISTENED to is market (primary the tens of thousands of volunteers that work their asses off for free as Scout Masters, etc.) and added an option for girls to pursue the Scouts model fully.  That is all, there is no more.   Again note the chart, for Cub Scouts there are single gender dens and for Scouts BSA single gender troops.

This debate has raged for a few years now and opponents often say, “why don’t the Girl Scouts fix their program”?  Well, I don’t know, you will have to ask them, the Girl Scouts organization isn’t part of this decision, they sure didn’t lobby for it.  This leads us to the next bit of confusion. 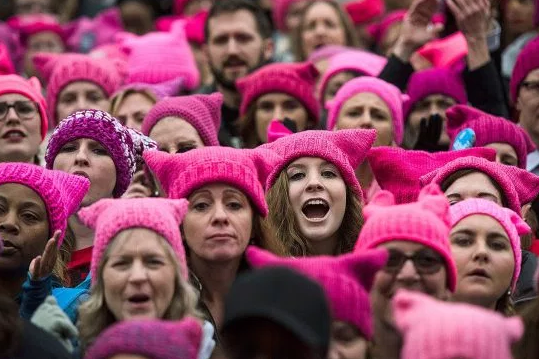 Many people seem to believe that this change is driven from outside scouts by a bunch of leftists morons like the ones in the above picture.  That say the government, a court decision, a lobbying group or something like that is behind it.  You know part of the vast progressive, liberal, commie conspiracy to deny any difference exists between the 21 or what ever made up number of genders they have now are.  This is nonsense, said folks are far more concerned about Stormy Daniels then the scouts.

To understand this change you need to understand the men and women that actually are the organization.  These people number in the 10s of thousands and they do all the work they do for free.  Because they love children, scouting and teaching young people how to become solid well rounded adults.  And this runs in many families.

Talk to many scout leaders and you will find they were a scout, their father was, etc.  These people generally have children and shocking as it may be some of them are girls.  Often these girls join “Girl Scouts” which again has NOTHING to do with BSA at all but they are bored.  Now a boy in this family is going for Eagle, and man folks that opens doors.  If you go to a job interview and competition is fierce and you are pretty much an equal to your competitor but you are an Eagle and the guy hiring you is an Eagle, you are likely to win out.  That is but one door.

The accomplishment of Eagle is a big achievement and it isn’t just the doors it opens, those doors open because a young person getting it done has proven something about who they are.  In simple terms, the program works.  Those that achieve Eagle become better people in doing so.  So little Debby naturally wants to know why her brother is doing all the cool stuff and has this great goal to work for and man Dad, Mom, Grandma, etc. are all so proud of him, the family is a scouting family and she wants to do it too.  Now she may do Explorers or Sea Scouts but she really wants to do Scouts.

Now her mom and dad have likely given thousand of hours of free labor to Scouts too and they want a program for her and THEY ARE WILLING TO SUPPORT AND RUN THAT PROGRAM.  Do you get it yet?

BSA is a private organization and they would be out of business tomorrow without all the men and women that do all the real work for free.  If those people were opposed to this, it would not be happening.  The reality is all these objections are coming mostly from people not involved in Scouts, most of them never even were say a Cub Scout as a kid.  To be blunt since they are not part of the organization, it really isn’t even their business.

They don’t have a effing clue as to all of these things, they are just upset by the most recent “outrage de la semaine” and with no comprehension of the facts at all, it just gets lumped in with more lunacy from the left.

In the end these people generally say something like, “why can’t girls just create their own organization”?  My response is why is that your business in the first place?  And regardless of what some other group does essentially that is what BSA has done here.  Basically what they have said is….

Okay we already have a great product, the people who run our organization for no money are willing, ready and able to run one for girls too, and they have told us they want to.  All we have to do is make a few changes that largely won’t affect current scouts and lets girls have their own troops, so since that is easy, since our customers and members want us to, let’s do that.

In the end this decision is the decision of a private organization, it was made by their board of directors driven by feedback from their members and their market.  They found what appears to be a very good solution, one that gives girls the opportunity they want without ham stringing boys in their own pursuit thereof.

Now actually I have some real problems with a lot of recent decisions by BSA, such as scouts not being able to play paint ball or shoot each other with water guns, etc.  I find this to be utter stupidity!  In fact I see this move as a last ditch effort to save an organization that has been crippled and is already dying.  It is sad but the top brass started committing suicide long ago, the eventual death is very likely now.  This move won’t save them, only major structural changes can, I don’t expect to happen, but I will bet people blame this decision when the organization folds.  It won’t have anything to do with it, nor will it save it.  The move harms no one but it is worse than giving medicine to the dead, it is administering a placebo to the dead.  My guess is BSA has 2-4 years tops before falling apart.   We shall see.

In conclusion the final point here is unless the people that give their time, money and labor as volunteers will support this change, it won’t work.  It isn’t like cops are going to escort little Susan to Troop 144’s meeting and make the boys let her in, and some of you seem to act as if that is actually what is going on here.

No unpaid, under appreciated adults will have to provide the support for these new female troops and do so of their own free will.  If you have a problem with those people being eager to do so, well, you really have a problem in your own heart.

P.S. – I am sure some of my regular listeners and readers are thinking, “why isn’t Jack taking his own advice and simply ignoring stuff that doesn’t effect the temperature of the water in his pool”.  To a degree you are right!  But not really.

Here is why, first due to my platform and reach, this issue is in my circle of influence.  While I am sure I will get a lot of flack here, I do know this will actually change a lot of opinions simply by showing the real facts vs. the mythology around the issue.

Next my job is chiefly an educational one, and one thing I am big on is the use of logic and reason.  The objections here being so divorced from logic and reason made this a unique teaching opportunity.  Usually hot button issues are ideological but here, many of the objections exist solely from lacking facts.

I think most reasonable people no mater their political leanings would be fine with this if they simply had the facts about it.

That said for those still upset about it, those asking why I would even bother here have a point, put it in your journal and get with me in about 8 weeks time.