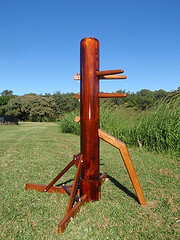 Muk Jong Dummies are Expensive but you can Build Your Own.

Young Smith has studied and taught Martial Arts for 35 years.  He has also served as a Prison Chaplain, Massage Therapist,  Youth Minister and trained Multi-handicap persons to work regular jobs.

Young  holds multiple Black Belt rankings but says of himself, “I’m not a ‘famous’ martial artist, or probably even that skilled – I have just been ‘beat up’ by some pretty incredible highly respected martial artists”. His is also CERT and CPR certified and has been a  TSP listener for about a year now.

Today we discuss concepts like what does martial arts have to do with prepping, why not just own and know how to use a gun.   Why you should consider some martial arts even if you have a gun, a backup gun, a Tazer, a knife, a boot knife a wallet and a throw away wallet.

How to determine the best martial art for yourself and what to look for in an instructor.  The often overlooked components at the student level, such as body type, age, phyical conditioning and the individual students true goals in life.

How you can train without going to a martial arts class including some unique and somewhat seemingly unrelated options.  Thoughts on the value of “soft styles” such as Tai Chi and how they are often mistaught or misunderstood and why training “slow” can be just as effective as training fast.

Thoughts on some useful homemade training tools like duffle bag punching bags, Makiwara-striking posts, Muk Jong-wooden dummies, swinging targets, juggling, balance posts and gardening-swinging a “weapon”/garden tool.  We finish up on thoughts of some non projectile weapons such as knives, rope darts and other improvised weapons.