This morning we had to do what most dog owners eventually always do in the end, say farewell to a friend.  As many of you know Blackie was diagnosed with terminal bladder cancer almost 2 years ago, thing was no one told him that he only had two months to live so he just decided to rock on and stick around for a while.  For almost two years after that his vet simply shook his head and said, “well doctors don’t know everything”, each time that he saw Blackie not only alive but in good spirits and doing well. 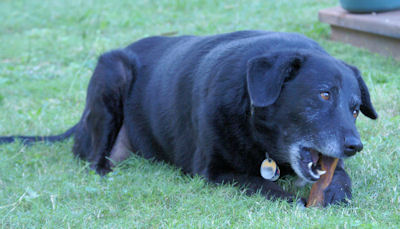 Our Friend and Loyal Companion for 16 Years.

Well the last few weeks were different.  He slowly stopped eating and then this weekend he crashed.  After that he couldn’t stand and even refused water.  I really hoped he would simply pass on his own and nature would take her course, it was not to be though.  So this morning Dorothy and I took him to the vet to be put to sleep.  He died in the arms of two people that dearly loved him, you just can’t do much better then that.

Yesterday our son got to see him for the last time, that too was a gift.  Even Matthew could see it was time to let our friend go on to the other side, I was happy to have had the chance to know he understood.  A boy and his dog are something special.  In this case it was a relationship that began when an 8 year old kid chose this special dog because he thought he was “special” in another way.

Matt had his heart set on a golden retriever but  I have always believed that you should adopt first if you can.  I was also broke at that time of my life and didn’t have 800 dollars to shell out to a breeder.  So we went to the Ft. Worth Humane society.  He was pretty upset that there were no goldens to be had but I explained how if no one took these dogs home eventually they were put down, that it was up to us to save one if we could.

You might think that is a heavy load for a kid but he got it and soon decided that it was the right thing for us to do.  He found Blackie (the shelter had named him Count) as a little fur ball of about 8 weeks of age, part of a discarded litter we were told.  What made our kiddo pick this one though?  He peed in his water dish, our son said, “we have to take him, he is so dumb no one else is going to want him”.  Well, you can’t argue with that and so began 16 years of devotion.

I also showed Matt where I will bury our friend today, we shared a moment together talking about our friend.  I couldn’t bring myself to explain why I choose the spot to him at that point, but it is a special place.  It is on the very back corner of our land under some big trees.  It is right near the property line so it is land that won’t ever be disturbed with our homesteading activities, so that is part of it.  Here is the special part though.

On the other side of our fence is a trail, not a trail like a person would build, more of a small wash with a game trail on it.  Between that trail and our land is a fence, a fence we can’t cross.  Blackie though is no longer bothered by fences and can roam as he pleases.  I can’t think of a more symbolic and special place to lay my friend to rest.  I know he isn’t in his shell any longer, he has crossed as all mortal beings do but this is a spot we can go to visit him in spirit.

I know if his spirit wants to walk with us on our evening walks that trail will lead him to us and that fence will mean nothing to him.  I am very glad that fate allowed our friend to live long enough that we found our place here in Texas.  I wouldn’t want it any other way, I am glad we have this special place for him to be laid to rest.

There will be no TSP today, I need to now go and tend to the last thing I can do for my friend of 16 years.  Our home is now unbalanced, we are a two dog family with only one.  That will change some day soon but not now, for now I am simply content when I realize not only was Blackie a great friend who helped raise our son into a fine man, he was well cared for in return.  Being a dog in the Spirko house is a pretty good gig.

During the last few months Blackie has been hard to get to eat.  During this time I have cooked that dog, chicken, pork chops and steak, and you know what, I’d do it again if I could.