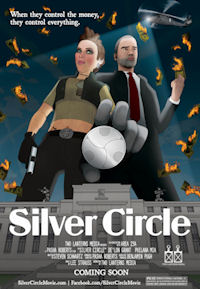 Pasha Roberts is the Director/Producer of Silver Circle an animated film which explores the impact of excessive government and hyper inflation in a fictional near term future.

Pasha holds a bachelors degree in Economics and Russian Studies from The College of William and Mary, and a Masters of Science in Financial Engineering from the MIT Sloan School of Management.

In addition to his MIT degree, his background includes twenty years of software development and successful entrepreneurship experience.  Today he joins use to discuss the premiere of Silver Circle, the movie & graphic novel.

Today we discuss the film with Pasha including why he decided to produce it in the first place.  Why it was done and an animate film and how that approach is reading a young audience that isn’t generally interested in complex economic issues.

Additionally we will discuss some current events and silver’s history as “the currency of the middle class” also with why it makes the perfect form of a “guerrilla currency”.  We will also tell you where you can see the film, how to get the graphic novel and when the DVD version will be released.

Here is a synopsis of the story line of the film

At the center of corruption is the Federal Reserve who has gained enormous amounts of control over America’s economy, with disastrous effects beginning to show.

Standing opposite, is the band of Rebels who have vowed to take back the freedom they once knew…and they won’t go down without a fight.