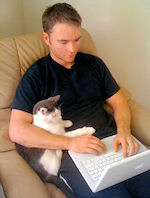 Robb Wolf, a former research biochemist is the New York Times Best Selling author of  The Paleo Solution – The Original Human Diet.  A student of Prof. Loren Cordain, author of The Paleo Diet, Robb has transformed the lives of hundreds of thousands of people around the world via his top ranked iTunes podcast, book and seminars.

Robb has functioned as a review editor for the Journal of Nutrition and Metabolism, is co-founder of the nutrition and athletic training journal, The Performance Menu, co-owner of NorCal Strength & Conditioning, one of the Men’s Health “top 30 gyms in America” and co-owner of Paleo Brands Inc. a paleo food company selling meals and snacks featuring grass fed meat, wild caught fish and all organic ingredients.

Today he joins us to discuss paleo nutrition and the misconceptions in modern nutritional science.  We also discuss his new entry into the world of Permaculture.  Interviewing Robb was like talking to an old friend and more like having a bad ass co-host then a typical guest interview.  I loved learning from him and I loved his openness to learn more about modern agricultural problems as well.

Some of you guys have questioned if this is a real “survival topic”, well friends I have given you 800 episodes now, do me a favor and give this an open minded listen and please listen to my explanation of why this is indeed a survival topic in today’s intro/housekeeping segment.