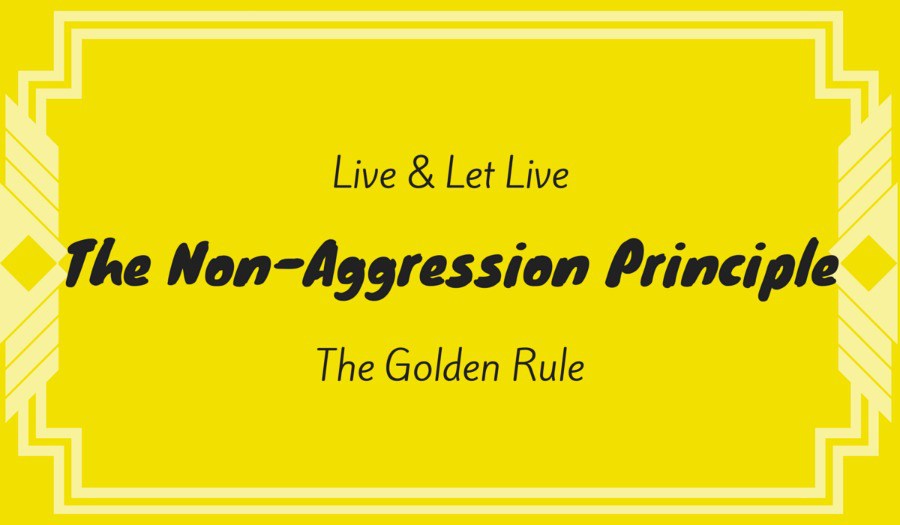 The one rule we should teach at the core of all ethics in our schools but never will is called the Non-Aggression Principle (or NAP).  The non-aggression principle is simply an ethical stance that asserts that aggression is inherently wrong. In this context, “aggression” is defined as initiating or threatening any forcible interference with an individual or individual’s property.

To put it simply I have no right to use force, violence or coercion on you to make you do what I want you to do or to take your rightful property.  My one true obligation to you as a fellow human being is to leave you alone to peacefully pursue happiness so long as you follow that same rule with myself and others.

I would like you to consider that if we taught that to our children we don’t really have to worry about so many issues others seem worried about constantly.

The NAP is the modern golden rule, JUST ONE RULE that if followed would eliminate every single crime (given that any real crime must have a victim) on the planet.

One simple rule that offers perfect and total respect to every person, no matter their color, gender, religion, etc. One simple rule that is at the core of most religions but yet remains universal to all of humanity. From the atheist to the devote theist anyone who is honest with themselves can understand the NAP is how we should treat each other.

One simple rule that allows people to form groups around any idea, theology, concept, etc. yet compels no one to join them or follow along.  Each man, women and child free to pursue their dreams, in their own way, with one and only one requirement, respect this in all other individuals.

Let’s look at dealing with a hot button issue in schools, bullying if we teach the NAP as the core of ethics in school.  Let’s say a teacher catches Johnny and Mike picking on Mark.  The entire corrective action is “Johnny you and Mike are violating Mark’s rights, stop it”.

You think that is an over simplification?  Children generally accept concrete reasons for things a hell of a lot better than something abstract.  Additionally there is power in any social situation, no one wants to be the bad guy, save for the small portion of society that are actual sociopaths.  When you have one sacred rule, “you do not interfere with the property and freedoms of anyone so long as they do the same” and that is taught as a core ethic, everything is abundantly clear to everyone.

So why won’t we teach this in our schools?  We can’t, because the entire institution that is the state and thereby the state run school system is, in and of itself, a constant violation of the NAP.

School itself is compulsory with parents threatened with jail time over truancy and worse.  School itself is paid for taxes that are taken against the will of those paying them, and the state will absolutely use force, violence and coercion to collect said taxes, etc.  Many times a child being bullied (having their right to the NAP violated) will want to change schools but can’t do so because of school district rules.  This is insane but it is the way we have allowed the system to be.

Some of you reading this right now are having the typical reaction and thinking, “but with out taxes how would we build roads and schools”, etc.  There are many answers to such questions, but we are NOT going to have to solve that problem any time soon.  So can I ask you to put these concerns on the shelf just for now, and get though the last bits here today, please?

I simply want to ask you, does the NAP on its own make sense to you?  Does it feel right that I do not have the right to use violence, force or coercion to compel you to make the choices I want you to or to take your property from you?  Great then let me ask you if you also agree with this statement, “all men (people) are created equal”?

Likely that statement is written into the core of your being, it is part of our Declaration of Independence isn’t it?  Democrats, republicans, libertarians, political atheists, etc. all tend to agree with this statement of fact.  And the reason is clear, it is a statement of fact, not opinion.  Equality here of course applying to rights, freedoms and the freedom to pursue happiness, not equality of ability in any particular area.

So if all men are created equal and I do not have the right to use violence, force or cohesion to compel you to make the choices I want you to or to take your property from you, who does?

What you are dealing with right now is some level of cognitive dissonance, looking back at that shelf where we put the “but how can we _____” issues.  Please let it go, just for today, it will still be there tomorrow, I promise you.    I do want to point out that the reason you feel this conflict at this point is due to the fact that in your heart you know that these are fundamental truths.

So what do you do now, accept the truth, speak the truth and teach it to others.  Above all we need to teach this one fundamental set of truths to our children.

Right now with the recent school shooting in Florida all political arguments seem focused on guns.  I however recently looked at this question differently, I simply asked, how many of our children of school age are choosing death over life.  Not just those that harm others but those that simply choose to end their own life.

What I am about to give you are facts with rounded off numbers to avoid arguments over exact numbers.  But again these numbers are facts, not opinions.

In the last ten years for all the claims that “children are being gunned down daily”, less that 220 people have died in school shootings.  This number includes adults and the shooters themselves.

Oh don’t you dare gloss over that number, it hurts, I know, but let it hit you like the hammer of reality it is, read it one more time and really take in in.

I keep hearing words like “political will”, “the time to take action”, “put armed guards in schools” and of course, “think of the children”.  Yet I wonder why no single politician, activist or member of the media has told you what I just did.  That while the death of a few hundred is tragic the death of 10s of thousands in the same period of time is more so.

Do you really think these two groups are unrelated?  Do you really think every school shooter is just an unbalanced sociopath who was sooner or later going to commit acts of murder no matter what anyone did?  Or is it more likely that in most instances these shooters chose a sick and twisted form of suicide by cop?  Given this recent shooting was one of the very few times we ended up with a mass shooter in custody, don’t you think saying these murders are also suicide by cop seems pretty accurate?

So knowing that 54,000 other students took their own lives, it is really shocking that say if you have 500 people pushed to the point of being willing to take their own lives, that one in 500 might try to take others with them, perhaps those they blame for their pain?

Now this is hard to face isn’t it?  Much easier to blame bad parents, video games, guns, drugs, anything but ourselves for these problems isn’t it?  As long as it is a thing, that is apart from us, we can be sad that so many died but we can be comfortable that it is someone else’s or something else’s fault.

Yet if we taught children the principle of non-aggression and enforced that one rule in our schools, how many of those tens of thousands of people might still be alive today?  The principle of non-aggression and the concept that all men are created equal are truths, I simply feel it is time for our nation to grow up and have a conversation about these inherent truths.

It won’t be easy, but the truth is never easy, it is however, always, dramatically simple.