I mentioned this last week and we are going ahead with it, for a variety of reasons.  Chief amount them is Facebook is now censoring discussions and posts even in private invitation only groups.  I am sorry but this is too much.  It is one thing for Facebook to censor speech in an open forum, but when this is done not just in a private group but one that requires an invitation, what is left?

To be totally clear we are not talking about illegal or illicit activities.  We are talking the same old shit, simply politics they disagree with.  Again I want to be clear this is now happening in groups that are 100% private which means Facebook personal are clearly giving themselves access to and monitoring supposedly private groups.

I personally have too large a following on Facebook to just abandon it.   I worked hard to build it up, but I also realize that Facebook could take it all from me in a single day.  It is time to begin a migration process.  To ease into it I want to invite any TSP folks that use social media to MeWe Mondays.  So what is a MeWe Monday?  Simple you sign up with MeWe and set up your profile and on Mondays, we give Zuckerberg a middle finger and do all our communication and sharing on MeWe.

To be clear you are welcome to participate at any level.  You can do both on Mondays, you can do what I am going to do and not even look at FB on Mondays or anything in between.  Some are just walking away right from the start, to tell you the truth, it is what I would prefer to do but again I can’t leave so many behind.  Over the weekend I will be running some numbers and determining exactly what percentage of my followers I need to migrate over to walk away for good.  Once I set that goal, I will work to achieve it and at that point, while I won’t delete my FB accounts but most of my posts will just be, hey want to know what I am up to, come find me over here.

To spur on MeWe Mondays I will be in The Survival Podcast Hangout Group for a open group chat every Monday from 10:00-10:30 as well.  Further I plan on reaching out to fellow influencers to attempt to get them doing MeWe Mondays with their followers as well.

Again I do stand behind the right of any private company to run their business as they see fit.  I also feel when they are taking from those who build value on their platforms and censoring things simply because they disagree with them in what is touted as a “open forum of communications” they stand counter to the values I have established for the TSP community.  This is a point where something must be done.

Many call Facebook a monopoly, but no one makes you go there, no one is prohibited from creating a competing service.  If Facebook is to truly become a monopoly it will only be because we allow it to do so.  I am also going to be moving The Ten Percent Project to MeWe and will shut it down on Facebook all together.  Over the years I have built multiple communities on Facebook with tens of thousands of members.  I won’t shut any of those down, it would be unfair to members, but I also will not use my resources to build any more of them for people who do not value the right of others to be heard.

So join me at least on Mondays, you can find my MeWe Profile Here, and you can find the TSP Hangout Here.  If you are into Regenerative Agriculture we have a ReGen Ag Group going there too.  If you are fan of Expert Council Member Nicole Sauce she has some cool stuff started up in her LFTN Group.  Two groups I am part of that I don’t run or have any influence over but I really like are the Self Sufficient Anarchist Group and Aquaponics and Gardening.

MeWe seems to be a free speech zone and yet there seems to be a lot less “political tribalism”, ya know, “orange man bad! no orange man good” type stuff.  I think it is largely because MeWe is growing via a slow but sure FaceBook exodus.  People who are in general just tired of the shit on Facebook.  Tired of things like “Facebook jail” and tired of things like the The Declaration of Independence being labeled as hate speech.  Oh, wait did you think I was kidding about them calling the Declaration of Independence hate speech, nope here you go.

So I see a lot more posts on MeWe about people’s dogs, kids and gardens, then I do about political bullshit.  Yet if someone posts some political bullshit and you don’t like it, MeWe’s stance is so the F what, stop following that person.

And to me this is where MeWe is really superior.  A great deal of the political bullshit that I see on Facebook, over and over by the way isn’t even from people I am connected with.  It is friends of a friend stuff.  My wife will post pictures of my grand daughter and that will never show in my feed, but some crap about some political clown will show up over and over again.

MeWe shows you everything from the people connected to you in chronological order.  Simple enough no?  They have a lot of other cool features and some premium options I am starting to learn about.  I will be discussing more about this on the show today, but please if you use social media consider joining us for MeWe Mondays or as some in our community are calling it as an alternative, F Facebook Mondays.  As a final thought, check out MeWe’s Privacy Bill of Rights. 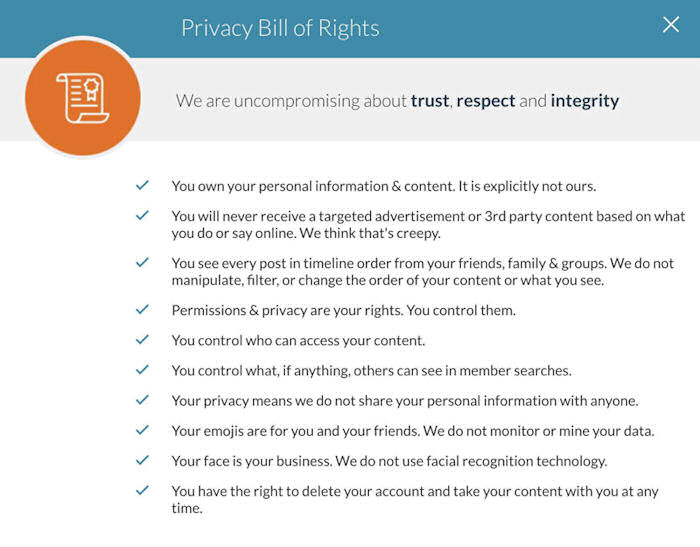