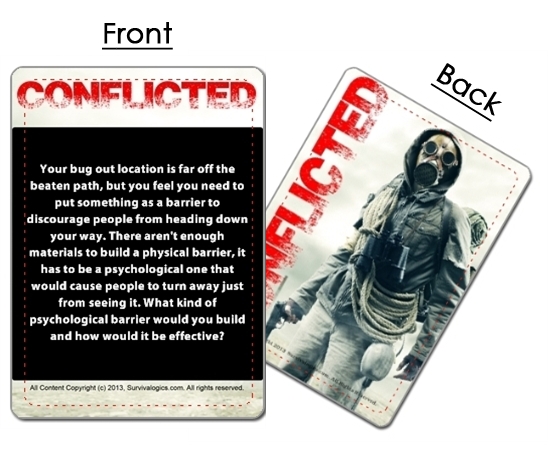 Get Conflicted the Game, MSB Members Get 20% Off

I am really excited to bring this new benefit to the MSB, not so much for the discount of a full 20% but more for the real value it offers.  Conflicted will help you make a lot of big “what if” questions real and examine what you might really do if you were in a true end of the world scenario.

Conflicted is the brain child of Survivalogics, Inc. which was founded in 2013 and is based in Fresno.   Conflicted: The Survival Card Game, is the first card game ever made specifically for preppers and survivalists. Conflicted is a game used by the prepper community as a training tool, and as a way to introduce others to the concept of preparedness.

Conflicted is a fun, mind bending game that explores the survival philosophy of the participants, the goal is to find out how far someone is willing to go in order to survive, without losing what makes us all human.  MSB Members get 20% off all Decks of Conflicted.  Learn more at http://conflictedthegame.com the discount code has already been added to the benefits section of your MSB account.

How to Play this Game

You can get full details of the rules here and get a great in depth overview of the game as a whole here but I want to give you the most basic simple rules and my thoughts no having played it.

First let me say I HATE playing most games, they take too long, I don’t really care who wins and many are complicated for no apparent reason.  But I like this one.  The basic rules are, a player draws a card, reads the scenario aloud, gets three minutes to explain what they would do and why.  Then the group discusses it, the player says his/her last piece and everyone scores the answer from 0-3.  The player with the highest score wins.

I have to tell you that if you read a scenario alone it isn’t that big of a deal.  But when you sit in a group and read it, have to say your piece out loud and hear what others think it really does start to make you think deeper.  Also I like that the game is very simple and strait forward.  It also doesn’t have to go on for hours and hours, you can play say 4 or 6 rounds and call it a game, check the scores and move on with life.

There is no board to set up, no characters to roll and create or other nonsense that makes me want to quit before we start.  It also encourages real dialog and real discussions.  Check it out and if you are MSB don’t forget to get your 20% off.  The second deck was just released, after playing with the first deck I am eagerly awaiting the second ones arrival.