Since I published my video using my Steven Harris design mobile battery bank during a recent power outage, I have been asked a lot about the LED Power Failure Light seen in it.

Here is the HD version of that video. 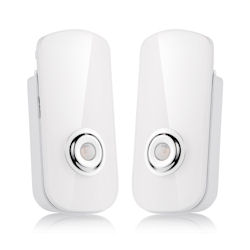 These are by far my favorite Power Failure Lights.

You see the light in the bath room off the hallway.

I have tried dozens of brands of these over the years, they are all useful while they last.  Generally at some point the over charge and stay on even when they should be off.

I have never been happy with any of them long term until I found these from Etekcity.

I have been running these now for over a year with no issues, they work and just keep on working.  The only down side is they take up an entire outlet.  I am going to change a few of my outlets to quads to deal with that, I like them that much.

They also have motion sensors so when you walk by them in the dark they turn on and go back off after no motion is detected for 30 seconds. This prevent stubbed toes in dark hallway, great for night bathroom trips too, with out lighting up the entire house.

They are plug and play, you don’t have to configure anything. You an pick them up and take them with you like a flashlight.

You can find them on Amazon they are called, Etekcity LED Night Light / Flashlight: Rechargeable Emergency Light