Here is the referenced episode in this podcast that YouTube took down, providing 100% proof the claims the video itself made are true – https://bit.ly/3zzbaBE

There is a lot of ra ra bullshit in the world and “never quit” ranks pretty high up there in the top ten examples. I interviewed a very successful farmer that dropped out of high school the second it was able to, never even got a GED but has continued to be a life long learner. When I interviewed him I served him a soft ball with this question.

But haven’t you heard to never quit, you were almost done with school, just one more year, why quit at that point. His response did not disappoint me, it was….

“I am all for quitting things that are unneeded in my life and make me miserable”.

I see this play out in so many ways where people are told not to quit but quitting is the best answer. Here are some examples…

A kid is pushed into a sport he didn’t really want to play in the first place. He hates it, he wants to quit, day says some stupid shit like, “the coach and team are counting on you, people in this family don’t quit”. Never mind dad is likely trying to live though his son. The kid hates it, the team is better off without him and The Cheboygonevill YMCA Junior Frogs T-Ball Team are not that important to the world or little Johnny’s future.

A guy is in a business, he is losing money like water out of a strainer. His buddies and his mind say never quit. Should he quit? It it turns our his business is a loss, he should quit now. I powered though a lot to make my business float but I also cut bait on some others.

Our nation invades another nation under false pretenses, 20 years later the place is a worse shit hole than when we started. Some say to pull out, leave the damn place alone. Others chant but if we don’t stay all those other men died for nothing. There is no hope of making the situation better, there is no interest of value to the nation and more men will die and yet staying the failing course is considered “honoring the fallen”. I mean winners never quit.

Never quit is terrible advice if not used with the right context. Today we determine how to know when to power though and when to well, quit. 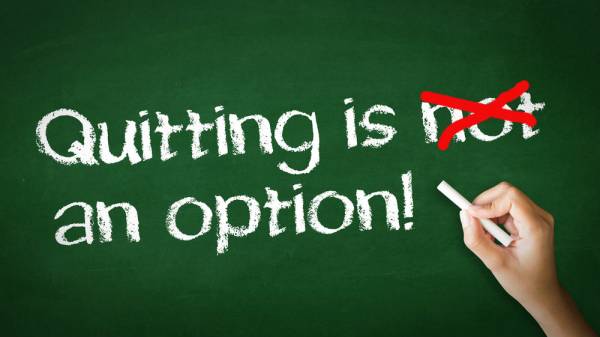