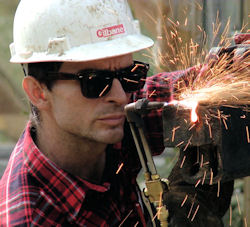 Marcin Jakubowski is a Polish-American who came to the U.S. from Poland as a child. He graduated with honors from Princeton and earned his Ph.D. in fusion physics from the University of Wisconsin.

Frustrated with the lack of relevance to pressing world issues in his education, he founded Open Source Ecology in 2003 in order to make closed-loop manufacturing a reality. He began development of the Global Village Construction Set (GVCS)—an open source tool set of 50 industrial machines necessary to create a small civilization with modern comforts.

His work has recently been recognized as a 2012 TED Senior Fellow, in Time Magazine’s Best Inventions of 2012, as a 2013 Shuttleworth Foundation Fellow, and a White House Champion of Change in 2013.

This concept has already been demonstrated in Linux, the open source computing system. With Linux, a large number of software developers have contributed to creating a viable alternative to the proprietary Windows computer operating system.

Many people can readily see the advantages- all Linux software is free. Please read these articles on the concept of Open Source software and its implications for changing business.

The OSE team is convinced that a possibility of a quality life exists, where human needs are guaranteed to the world’s entire population- as long as we ask ourselves basic questions on what societal structures and productive activities are truly appropriate to meeting human needs for all.

At the end of the day, the goal is to liberate our time to engage in exactly that which each of us wants to be doing- instead of what we need to do to survive. All have the potential to thrive. Today, an increasingly smaller percentage of the world’s population is in this position.