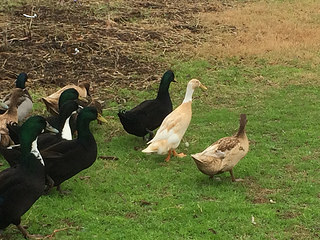 Season Two of The Duck Chronicles will Begin Soon!

Consider episode 40 a mid season teaser.  We will be bringing you what will essentially be “Season Two” beginning in about a month.  But don’t worry there is a lot to see today.

In The Duck Chronicles Episode Forty – Time for a Mallard Sortie the turkeys are now huge.  At only about 70 days of age the young males are already near 20 pounds in weight.  Also while I didn’t get it on video today, right after I shot this video one of the two gobblers started to gobble.

It is mid summer and the grasshoppers are at peak, so the birds are getting a ton of feed off the land and consuming about only half of the feed they were a few months ago.  We are dealing with “angel wing” on a few of the young muscovies.  This is a disorder that is supposed to be linked to nutritional issues, but I don’t think that is the case, the truth is no one knows what causes it or even if there is only one cause or serveral.  Sadly for these birds though I will not be letting them pass on their genetics.

We have a ton of girls brooding eggs with babies on the way anyway.  Mostly muscovies but a pair of cayugas have a nest together as well.  Additionally Pencil Neck the buff runner has been helping out, while not actually broody herself she is pitching in and giving the other girls breaks.

Lastly today we note that the ducks do have well formed social groups mostly based on who they were brooded with.  While not air tight you will observe most of the white layers stick together, so do the 18 young ducks that were part of our first clutch.  Barbie and her friends form a tight group of five even though Barbie can’t fly like the three baby mallards.

Mallards?  Yep you bet when Dorothy went to get friends for Barbie (now the most expensive free animal anyone ever “gave” me) the friends turned out to be one Cayuga and three mallards and of course two are fricken drakes.  They are fun to watch fly and you do get to see them do it in today’s episode, though a short flight I did manage to catch it on video for you.  Season two will be rolled out after our vacation! Stay tuned….