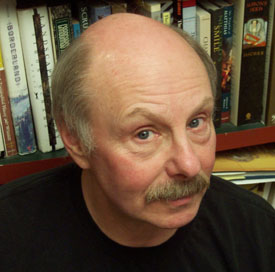 James Howard Kunstler wrote The Long Emergency, published by the Atlantic Monthly Press in 2005, about the challenges posed by the coming permanent global oil crisis, climate change, and other “converging catastrophes of the 21st Century.”

His 2008 novel, World Made By Hand, was a fictional depiction of the post-oil American future. The sequel to that book, “The Witch of Hebron,” was published in 2010.

In one of his latest books, Too Much Magic, he take a stark look at wishful thinking, technology and the fate of the nation and the implications of the belief that life can just continue as it always have.

James has lectured at Harvard, Yale, Columbia, Dartmouth, Cornell, MIT, RPI, the University of Virginia and many other colleges, and he has appeared before many professional organizations such as the AIA the APA., and the National Trust for Historic Preservation.  He currently lives in Saratoga Springs in upstate New York.