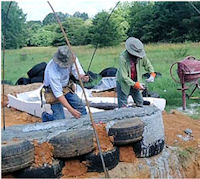 Mark Kirkwood is the cofounder of Biotecture Training and a self proclaimed life long survivalist. He teaches aquaponics, earthship construction, sustainable living and survival through community development.

He is 36 years old and his past careers have included working as a banker, health insurance professional, pest control specialist and as a construction worker.

Mark is currently married with 3 children. He and his business partner have invested a year and a half and several tens of thousands of dollars to build a foundation for people to come and learn how to live free of “the systems of man”.

Mark joins us today for a brief follow up to his first interview.  Today we discuss that trials of building alternative housing, avoiding POAs and HOAs like the plague, air wells, trombes and aquaponics systems using in ground ponds.