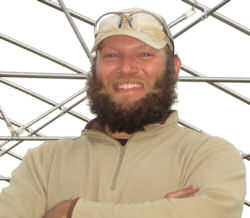 He completed an internship in Colorado, and remained there for several years, working for two different tree farm operations. During this time, he was very involved in outdoor recreation and was an active member of the Colorado Mountain Club.

During his twenties, Rob transitioned into residential and commercial landscape design, installation and maintenance. He gained experience working and living in Colorado, Ohio, and North Carolina. While In Ohio, Rob began studying Landscape Design at Cleveland State in 2004 while employed at Cahoon Nursery. After moving to Western North Carolina, Rob earned the title of Certified Plant Professional. He actively hiked the Blue Ridge Mountains and ran his first 10k Trail Run at the Bent Creek Classic in 2005.

At the age of 30, Rob shifted towards career growth and development and began working in the field of forestry consulting. His work began with Geographic Information System (GIS) based Utility Vegetation Management, and led to include Urban Forest Inventories, Wildfire Mitigation Grant Compliance Inspections and Federal Emergency Management Agency (FEMA) Storm Debris Monitoring program operations. Rob traveled all over the United States and gained experience working in a variety of biomes and ecosystems.

He currently resides in Medina County, near Litchfield. Today, he applies his extensive experience in the green industry several different ways. Rob works as a Nursery Sales Representative, Market Gardener, Permaculture Designer and Consultant, Author and Community Organizer. His goal is to work with others to share the knowledge and skills needed to live a healthy, positive and beneficial life.

Rob joins us today to talk about his recent experience in procuring a grant for the purchase and installation of a High Tunnel via the NRCS, his venture into market farming and other NRCS programs that can help new farmers get off the ground.