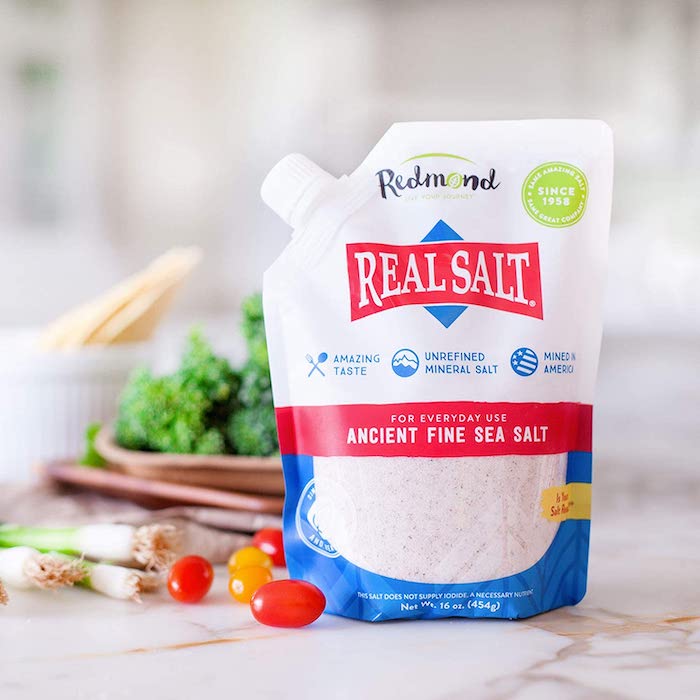 Today’s TSP Amazon Item of the day is Redmond Real Salt.  We first got this because Dorothy heard a certain YouTube personality state that “sea salt and pink salt are good sources of minerals, unlike table salt”.  I am going to be honest with you, while there is some truth to it there are two things to consider here.

1.  All salt is mostly sodium chloride which is what makes it salt.  There is an abundance of other minerals in natural salt, but it amounts to TINY amounts for most of them, minuscule even.  Hence in reality you won’t get a big mineral boost from any salt.

2.  All salt in the end is “sea salt”, every mined deposit on land including vaulted Himalayan Pink Salt was formed from seas in ancient times.  Redmond itself is mined in Utah not made from evaporated sea water.  So any salt not refined has trace minerals in it, but again quite small amounts.

So let me say I love various natural salts, they have different flavors, textures and unique qualities that they lend to foods.  As you may remember I have previously featured some other salt varieties like Maldon and Hawaiian Red Alaea.  So I love the unique attributes different salts bring to our kitchens, however I just want to be clear, if you want a good mineral boost take a good multi vitamin/mineral because salt alone won’t get the job done.  Additionally the best use for salts is on meat and if you are on a meat based diet you are on the most nutrient dense diet in the world anyway.

So what do I love about Redmond Real Salt?  First is the flavor profile, it is freaking amazing.  The next though is something I just discovered.  I am a huge fan of “dry brining” meat.  That is a fancy way of saying to salt meat and sit it in the fridge for 24 hours before cooking it.  I do this with almost all meat I cook now as long as I have the time to do so.  Even if we take meat out in the morning to defrost, I do it for a couple hours before I cook that night.

When I say all meat I mean all.  From a giant brisket, to a salmon steak, to a pork roast, almost everything, yes even chicken.  How much salt?  Not a ton but more then you would think and no it does not make meat taste “salty”.

So why Redmond Real Salt for dry brining?  Well since I do this a lot and I am looking for what brining does, “remove excess moisture and tenderize meat” I have generally used cheap kosher salt, saving premium salts like Maldon and Redmond for “finishing salt”, ie what you put on food right before eating it.

A few weeks back I had a pork roast to smoke and decided to give it a good full 48 hour dry brine.  When I went to do it the salt box closest to me was full of Redmond, so I figured why not and used it.  The next day when I checked on the roast it was beautiful.  It looked almost slightly “cured” but not fully like when you actually cure meat.  Somewhere between the two and when I smoked it, man it came out beautifully.

Since that point I use Redmond to dry brine all my steaks, chops, etc.  Again you get a different result, steaks have a deeper red then when you use a plain salt  Pork chops get a deeper red to them as well.  And the over all results (water reduction and tenderizing meat) are exceptional as well.  I will put it this way I actually consider it a “seasoning mix” for meat at this point.  And yes you can dry brine with flavors added, say mix in some garlic powder, etc.

Anyway I think if you try this Redmond Real Salt, you will really like it and I think the first time you dry brine with it, it will become a stable in your kitchen too.

P.S. – Here is a quick video showing what meat looks like after only a few hours of dry brining.  I also show you about how much to use for an average sized steak.  Just adjust based on the size of the cut.  In no time you will be able to do it by eye with anything you cook.  Trust yourself, this is not a complicated thing so don’t convince yourself that it is.

P.S.S. – If you are stuck on my claim that natural salts are not a great way to get minerals in your diet because every “natural health” website and YouTube channel on health says other wise, have a look at the mineral profile provided by Redmond’s themselves with their salt below.  As you will see once you past chloride and sodium, the actual amounts become minuscule. 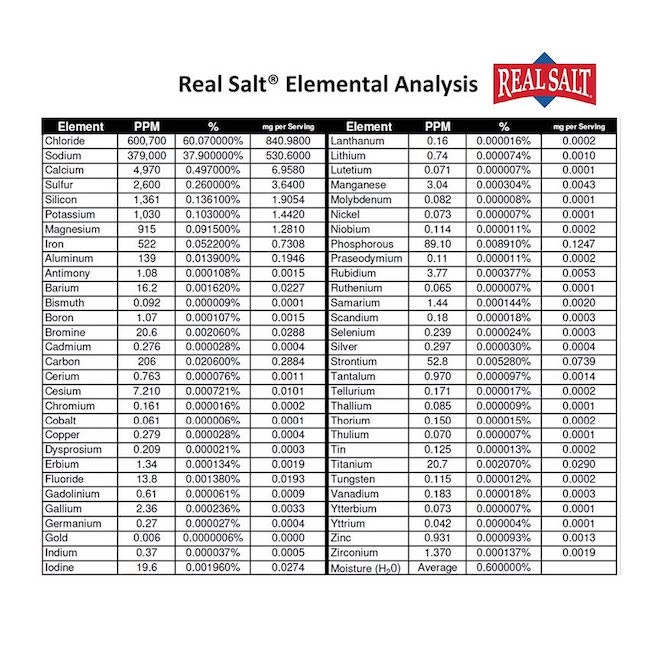