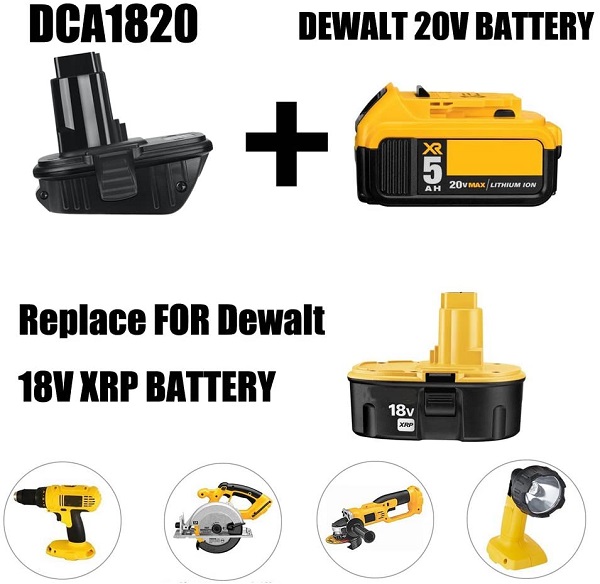 Today’s TSP Amazon Item of the day is the generic DCA1820 Dewalt Battery Adapter for 18V To 20V.  As many of you know I am a Dewalt fan from way, way back.  I am talking in 1995 I was using Dewalt drills and tools for CATV cable splicing and head end building.  At that time, almost every tech I knew used one brand and one brand only, yep Dewalt.

This work is hard on tools, we are talking be dropped and abused a lot.  Drilling into telephone poles, bouncing around in trucks, being dropped into muddy holes while splicing in ground cable, etc.  Dewalt became the brand of choice because flatly it survived where many other brands died.  Most guys doing this work are paid by the job, not the hour, a dead tool is something you just can’t afford.

I left that life of contracting many years ago now.  I have however; have stayed loyal to the Dewalt brand.  When the first 20V Max tools came out I thought, “well that is nice, but my old tools are so solid I just don’t care”.  Over the years though all my old 18V batteries finally gave up the ghost.  As I have purchased new ones something is very clear, the new 18V batteries are total crap, the live on average about as long as a goldfish you win at a school carnival.  I get it, it has now been over 5 years since the line shifted to the new technology.  Dewalt as this point has little incentive to invest in 30 year old technology.

I was tempted to leave Dewalt but tried some of their new tools on the new 20V platform.  It was more than enough to keep me loyal to big yellow and black.  Still what to do with all my older tools, so when Dewalt came out with this adapter I got one, it worked, I was happy, real happy.  Then I realized swapping the adapter to each tool was annoying as crap and it made using two tools on one job a total pain in the ass.  So I figured I would get say 4 of them and be set.  That is when the 34 dollar a pop price tag sank in!

I mean some of the lower end tools are only twice that as a “bare tool”, some less.  I have some heavy duty tools but like many I also have some lighter duty stuff, an extra drill or driver is just really convenient.  Yet I thought about it, was I really going to pay 34 bucks just to plug a new battery into my 15 year old light duty drill.  I looked around and the current light duty equivalent is a 20V Drill, with a charger and two batteries (all be it low amp hour batteries) for only 99 bucks.  No tool owner ever said, gee I wish I had less batteries and chargers.  I mean at 34 bucks for the adapter, if I bought a charger and a single extra battery I’d be behind in money spent to keep an old ass tool running.  I don’t make decisions when the math says I am going to lose money by making them.

I looked at it, was I going to throw away this old friend?  Sure he was a weakling compared to my heavier tools but 15 years, never skipped a beat.  What to do.  Then I found these guys, the generic version of the DCA1820 Dewalt Battery Adapter for 18V To 20V.  At only 29 bucks for two of them it lets me bring back my old tools into service with the new batteries for only 14.50 a piece.  That works.

So I checked fakespot and they got a B on the mostly good reviews.  Most of the bad reviews had to do with shipping, which is the post office or UPS or whomever not the tool.  The other complaint is if you leave the battery in the adapter in the tool it will drain the battery.  Guess what if you pay more then 2 times the cost for the factory one (meaning from what I can tell it has yellow on it) it does the same thing.  It is a flaw but it is the same with the 34 vs. 14 dollar version.  Want to know why?  Because they are the same damn thing.  After examining both I have to say the only difference is the name plate and one again has the famous yellow color on part of it.

So now I am back solidly in the DeWalt camp and my old tools work right along side my new tools.  So if like me you have older Dewalts in 18V and just don’t want to retire them check out the generic version of the DCA1820 Dewalt Battery Adapter for 18V To 20V.  From you heavy duty to light duty versions it is totally worth 15 bucks to keep your old black and yellow friends around.  Just when done for the day leave the adapters on the tool and remove the battery pack.  Hey these new batteries should go strait into a charger anyway.

Special Notice – Can Anyone Recommend a Generic Battery?

This generic option works, here is a call out to the audience, can any of you tell me a 20V generic battery for Dewalt tools that is not a total piece of crap?  I have tried two now, both were total garbage one failed out of the box.  Since batteries are a “fire hazard” you can’t use Amazon’s generally stellar return policy and you get screwed.  I have tried two looking for a good one, I am out on getting burned but if any of you have found one you actually bought and had good results with let me know.

Heads Up – 20V Chargers are not Drop In like the Old 18 Volt Versions!

Lastly if you are new to 20V Dewalt tools check out this video for a reason many have trouble with the chargers.  They work great but if you are old school and used to dropping a battery in, it will cause misery with the 20V version, they must be clicked in like you do for the tools.  This little 2 minute video has literally hundreds of thank you comments on it.  I sure wish someone at Dewalt would watch it and fix this issue that gets them tons of shitty reviews.  All it would take is a sticker on the chargers saying, fully click batteries into place or something like that.