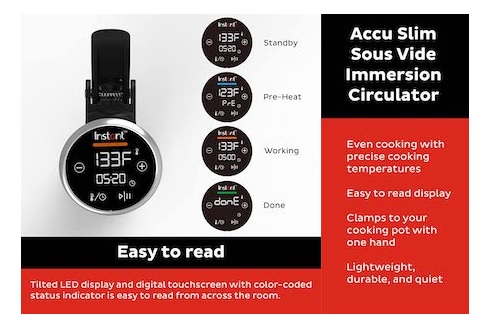 Today’s TSP Amazon Item of the day is the Instant Accu Slim Sous Vide Precision Cooker.  Long time listeners know I have talked about Sous Vide cooking a lot on the show because it is just an amazing way to cook and sous vide circulators do a ton more than just cook steaks.  You may also note for a few years I have recommended the Anova circulator.

I am not taking back my recommendation but my Anova just semi died.  What does that mean?  It still heats water but the circulation fan won’t run and is not fixable.  Now with a little redneck engineering I made it work with a 10 dollar nano fish tank pump, but I also want one that just works.  It so happens in the same week my Anova died my friend David’s Anova died too.  He had a true death where the thermostat failed and his started boiling the water like mad.  So it seemed time to find a new one to recommend.

So I found the Instant Accu Slim Sous Vide Precision Cooker. The Instant is in the title because it is made by the same folks that make the InstaPot that is so famous now.  The retail on the Instant Accu Slim Sous Vide Precision Cooker is 99 dollars which about the same as the Anova Nano and 40 bucks under the Anova AN-500.  I actually got mine on sale for 69 bucks but that sale ended before I got to try it out and decide if I would recommend it.

In short I love it, simple to use and it works really great.  Setting it is simple and it also has a timer you can set as little as an hour and as long as 3 days (72 hours).  One great thing about that is the unit has enough intelligence built in that the timer does not start until the set temp is reached.  As to accuracy I tested the water temp with both my instant read thermometer, a candy thermometer and a Meater probe.  All were with in one degree of the set temp.

Sous Vide is a method of cooking that I describe as a dry poaching.  Poaching of course is holding a food item in a liquid until it is cooked to your liking.  This keeps foods moist and prevents over cooking.  It is also simmering in water when you get right to it, for some stuff that is fine.

There are a few primary differences with Sous Vide.  First it uses a precision cooker, meaning if you want 137 degrees you get exactly that, if you want 165, and you might, say for chicken, you get EXACTLY THAT.  Not 162, not 166, not 163, you get precisely the temperature you want.  Most poaching is a best effort process.  It also in general uses higher temps say 180 for instance for eggs.

Next Sous Vide is dry, well not exactly dry but the food doesn’t contact the heated liquid, it is instead held inside a food safe bag.  This can be done with a quality zip top bag but I prefer to use a vacuum sealed bag.  The meat or other item is seasoned as you choose, then cooked to the exact temp you want.  After that it is finished with a quick sear, about one minute per side or less.

For steak the results are a perfect cook to your preferred temp, we are talking end to end pink or red or what ever you want.  Not perfect in the center and darkening to the outside.

Overall I resisted Sous Vide when I first heard about it.  I considered it the realm of hipster types and what have you.  I have become a full on convert, in some ways it has changed my life a little bit.  I don’t use it every day, I do use it at least once a week though.  Over time you find the things that work best for you with this method and the things you prefer to do more conventionally.

I also figured this was sort of a fussy pain in the ass method until I tried it.  I was wrong!  Compare it to conventional cooking in a real world scenario.  Say I want to make steak tonight.  We have my grandkids, my wife is busy, I am busy, etc.  My daughter-in-law some days has to work late, we don’t usually know that until about 4PM, then we don’t even know how late, late might be some days.  Then there is my wife, after a day of taking care of kids she doesn’t want to eat right away when they are gone.  We just want some peace and quiet for a while.

So I have to wait until we are both ready.  Then fire up the grill, then try to get my steak perfect for me and her’s perfect for her.  The entire time dealing with “I’m not really ready to eat just yet”, soon followed by, “well now I am really hungry”.  The later it gets the more likely we are to end up eating left overs or something.

Contrast Sous Vide.  Toss seasoned steaks in bag, heat pot to 137 (my preferred temp), cook 1 hour, 15 minutes.  Remove my steak, turn up heat to 150 (her preferred temp) cook 20 minutes.  Turn temp back to 135, throw in a handful or ice to drop the temp then toss mine back in.  It can now sit there an hour, nothing is going to happen, it can’t over cook.  When she is ready, take out steak, heat carbon steal pan, and or grab torch, sear, takes bout 3 minutes tops.

You tell me which way is more fussy and a pain in the ass?  So if you have been looking to try sous vide then the Instant Accu Slim Sous Vide Precision Cooker may be right for you.  Again I am not saying there is anything wrong with the Anova.  Sous Vide cookers seem over all to have a life expectancy and I am sure that will get longer as tech improves with them.

Yes my Anova died but it was ridden hard many times.  I for instance once cooked three briskets for 2 days in a igloo cooler with it as one example.  I got two years out of mine but likely had the milage on it that a normal household might put on it in 4-5 years or more.  So either way, consider making sous vide part of your life.

Remember you can always find the TSP Amazon Item of the day by just going to TspAz.com and by shopping at TspAz.com anytime you shop on Amazon you help support TSP and the work we do here no matter what you buy.

P.S. – Wanted to add a bunch of additional things Sous Vide cookers can do for you. Here we go.

I love TV Chef Alton Brown and one thing we both really agree on is unitaskers suck unless they are the only thing that works for the intended purpose.  Screw yogurt makers etc.  The Sous Vide circulator can make boiled eggs to the exact level you want, make cheese, make yogurt, make dessert, make egg bites and still cook a perfect steak.  It has become one of the single most useful tools in our home.  Oh and man you gotta try the cheese.