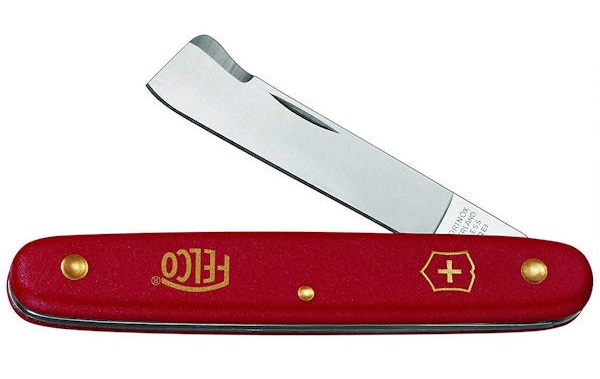 Today’s TSP Item of the day is the Victorinox Budding & Grafting Knife.  I of course originally got this knife in order to learn grafting.  I  have done a few grafts and most took.  It is a very valuable skill and I consider it like all methods of plant propagation to be literally printing money.  Consider that you could for instance simply save apple seeds, grow them as your own root stock and produce as many 20-50 dollar trees as you want for no real money.  You can do the same thing growing say peach pits and grafting plumbs and peaches onto that root stock.

Hey you know that tree that died on you but the root stock took off and is going gang busters?  Prune it back and graft onto it.  This really is one of those life skills everyone should learn.  There are even people that do “guerilla grafting” basically a peaceful form or anarchy transforming useless trees into productive ones.  You don’t have to be a guerilla or an anarchist to do this though.  Ben Falk for example grafts apples onto wild apple trees to help feed deer.

So what does a little magic tool that can make thousands upon thousands of trees worth 10s or thousands of dollars set you back?  About 20 bucks.  When I asked Nick Fergusion which knife to get for grafting, he said, get the Victornox and if you don’t get that one, just don’t bother.  It is too inexpensive to get anything else and there is nothing better.

Victornox is of course famous for their Swiss Army Knife.  The Swiss tend to do quality in all things and this little knife is built with same quality you’d expect from Victornox.

Let me tell you something though, while I bought this for grafting I use it all the damn time.  Why?  Because it is just so dang handy.  Basically this thing is a little strait razor, with a bark lifter for grafting milled into the end of the blade.  As it is for grafting it has a single bevel blade and it is think enough to have backbone but pretty thin compared to a typical knife of its size.  This makes it stupid simple to sharpen.  I have had mine about 5 years, I use it all the time, I have never sharpened it with anything expect a steel and it will still shave hair.

Since it is so small it almost disappears in a pocket in a pair or jeans.  I have used it mostly to harvest greens in my garden.  If you think about how you hold a knife to graft that is perfect hold for cutting greens in your garden.  But since it is so nice to carry in your pocket you end up using it for anything a sharp blade is needed for.  Heck I have even pulled it out and cut meat with it at restaurants when the cutlery they give you sucks, we have all been there.  It is also one of my favorite tools for cutting cherry tomatoes in half for dehydrating.  Never squishes them, nice clean cuts.  It is great for skinning small game as well.

So if you want to graft, get one but really this is just a great little pocket knife.  It is not a bush craft style work horse and it has limits but it is one of the nicest little knives I have ever owned.  It is one of those simple little tools that you just can’t appreciate until you own and carry one.    I look forward to giving mine to my grandson when he gets just a bit older.  The great thing is it will be “Grandpaw’s Knife” to him and something he will keep long after I am gone, but Grandpa can just order another one for 20 bucks.  His sister will get that one after I give it a good 5 years of work, so it has “Grandpa on it”.

Folks there are not many things made for 20 bucks anymore with enough quality to last a life time.