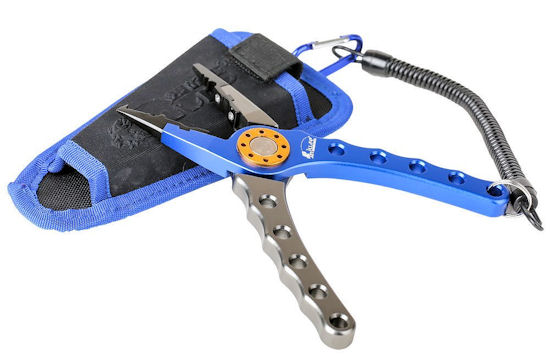 Today’s TSP Amazon Item of the day is Entsport Saltwater Fishing Pliers.  Now given that 95% of my fishing is in fresh water you may wonder why I selected a salt water set as my go to.  Well pliers are pliers to a degree if they are good ones anyway and have similar features.  Yet something designed to hold up to salt water corrosion will do very well for the fresh water fisherman.  I.E. they don’t rust easily or corrode easily.

I have tried out several brands and these are the best I have found.  Like everything I review they are well reviewed and highly rated on Amazon, with 5 Stars total with 50 plus reviews.  More importantly I have used these personally now for 4 years, my current pair is now more silver than blue on the blue side from being warn down.  They still work perfectly.

There is one weakness to these and that is the carabiner.  The one included is certainly strong enough but it can get bumped open and then you can lose a pair.  Yep I learned by having it happen, fortunately I was in only ankle deep water but lesson learned.

This put me on a mission, find something to replace the shitty carabiner with that doesn’t cost as much as the dang tool.  These are quality but I didn’t get them off the SnapOn truck, paying 25 bucks for a climbing grade carabiner for a 17 dollar tool simply does not make any sense.  I had two ideas, one was to use a chain link connector like this as they are strong as hell and have almost zero chance of coming undone by accident.

The down side is you may want to remove the pliers from the tether to say hand them to a friend who is not quite as prepared as you are.  Chain link connectors take a bit of time to do that with, more importantly they can and will rust and corrode and even just a bit and you can’t get them open without tools and some WD40!

Eventually I found this 4 pack of carabiners, they are only 5.99 with free Prime next day shipping, in other words they are 1.50 a piece.  I should make them a stand alone item of the day.  With a weight capacity of 110 lbs I won’t be rappelling with one or even quick connecting a hammock with them, but for light duty they are absolutely awesome.  The are aluminum alloy so they won’t rust shut on you or corrode shut unless you really and I mean really abuse them.  I put a bit of reel grease on the threads of mine and it has never needed a second application.   Again for light duty stuff like keys, attaching stuff to a pack or keeping pliers handy these carabiners can’t be beat at this price.

Some of the features important to me on these pliers include.

In the end they are the best set of fishing pliers for the money and I think with just a bit of care they should last many many years.  So check out the Entsport Saltwater Fishing Pliers and give you fishing kit an upgrade.