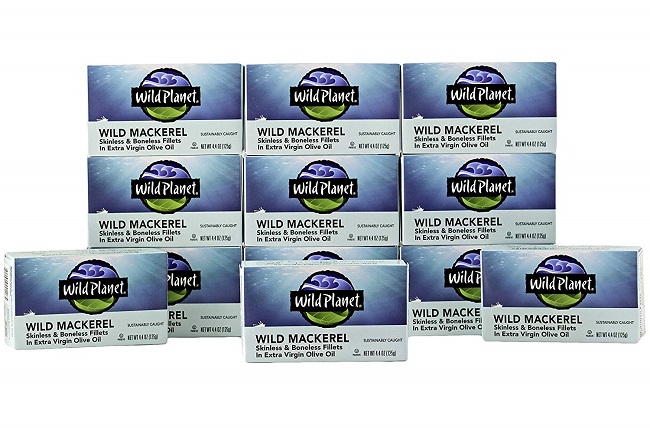 Today’s TSP Amazon Item of the day is Wild Planet Wild Mackerel Fillets in Organic Extra Virgin Olive Oil.  I have to say when I found these back in 2019 they were the find of the year for me!  So much to love here.  I expected something like a sardine, you guys know I love Matiz Gallego Sardines, still they are sardines.  On a whim I gave Wild Planet’s Mackerel a shot.  Holly crap, I can’t believe the bang for the buck these things are.

The issue with canned fish is always texture.  I mean the canning process for meats is long and high temperature.  Fish is usually falling apart when canned.  This isn’t, it stands up, I mean I would not but you could bread and fry these little fillets if you chose to.  They are skinless and boneless to boot.  They do not smell fishy.  I love sardines but eat less then I want to because Dorothy always complains about the smell, these smell no more then opening a can of say tuna.

On that, now that I found these I will likely NEVER EVER buy a can of tuna again.  Anything tuna can do, this can do better, by a long shot.  If you have ever had really high end jarred tuna, it is a lot like that, but I would say to me it is better, a lot better and a lot cheaper then that type of tuna.

Health wise mackerel (especially small Atlantic Mackerel which this is) is a safe fish to eat multiple times a week, as it is low in mercury because is low on the food chain, way better on this than even smaller species of canned tuna.  It is aalso an fricken Omega 3 power house with a ton more Omega 3 than you can get in even the very best grass fed beef.

Here is a salad typical of what I make with them frequently, God this is good and the oil makes a perfect dressing. 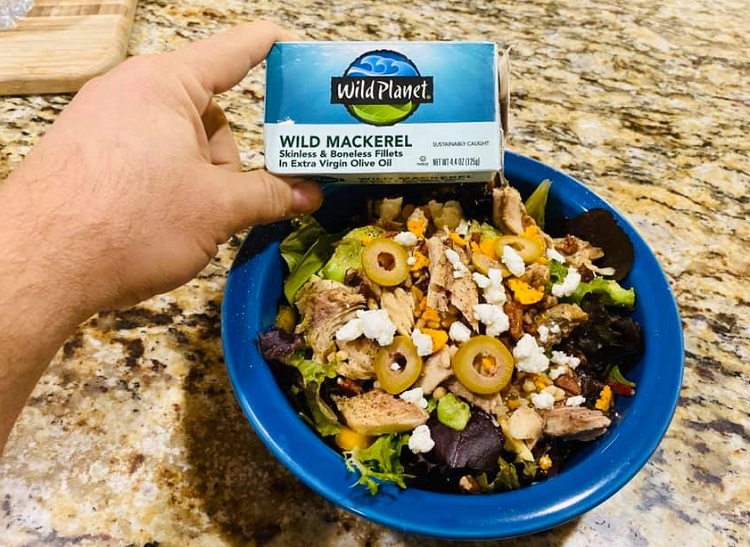 For the above lunch I put it on a bed of organic greens with a cubed avocado, peppers, apple wood smoked olives, feta cheese along with a bit of pecans and pine nuts and a small crumble of cheese crisps.  This made a salad I had may be 4-5 bucks into that I am sure would cost barely south of 20 at an upscale restaurant.

On the nutrition profile, the ingredients are Atlantic Mackerel, Extra Virgin Olive Oil, Sea Salt. FULL STOP nothing else. Macros are 180 Calories, 11g fat, 21g protein and 0g carbs. The fat here again is some of the best Omega 3s in the world along with extra virgin organic olive oil.  Have you bought organic EVO lately, it isn’t cheap.

The price has gone up in the 2 years since I found them.  What hasn’t?  They are still very affordable though.  A 12 pack case of these is 42 bucks, that is about 3.50 a can.  Next this audience is made up of preppers right.  Good protein and fats that store well are the hardest thing to add to your cupboard.  This is one reason we buy expensive #10 cans of freeze dried meats to extend that.  Of course we prefer eat what you store and store what you eat.  Well here you go, the expiration date on the batch that just came in on 1-11-22 is 4-18-26!  Trust me they will not last that long.  I eat these now about 1-2 times a week.

In episode 2538 when I first featured them I gave you some tips on using them and later again in the closing segment of episode 2858.  Today I will talk about them again a bit for episode 3027.  As you can tell after 500 episodes I still love these little guys.

Is there any down side?  Only one I can see if you get them on Amazon is, they seem to be in 12 packs only.  So trying a can or two to see if you like them is out unless your local market has them.  Let me say though if you enjoy tuna at all, even a bit, you will be happy with these.  They taste better, have better texture and smell better.  They don’t taste just like tuna, but they taste like tuna the way say rabbit tastes like chicken.  Give them a shot and I don’t think you will be disappointed.  Pick up a 12 pack of Wild Planet Wild Mackerel Fillets today and add them to your prepper pantry, I just bet you will be ordering more in a month or two tops.

P.S. When I was checking out Wild Planet I also got some of their canned anchovies.  These were awesome as well!  I am featuring them here though for another cooking idea.  The soup below was GOOD, it would have been great with the mackerel instead of the anchovies and a better suited sausage.   Here is the soup and what I made it with along with the somewhat comical story of how it came together.

Trust me use the mackerel here instead of anchovies (which were not bad) and use a good andouille sausage or something like a habanero sausage and this thing will blow your mind.  Prep time and cook time combined was about 15 minutes and that was making up the recipe on the fly.  This is enough for a side dish for two or a meal for one.  Easy to double, etc. 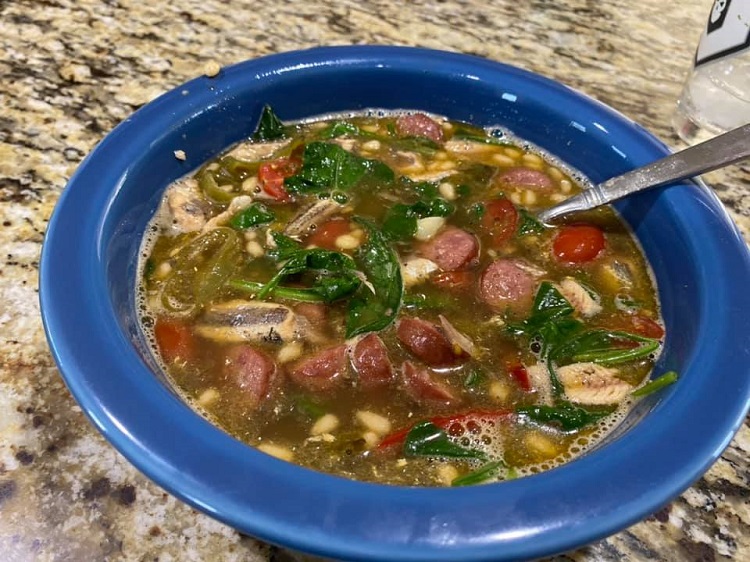 So here is how the thing started. This am when I watered the garden I grabbed a jalapeño, a hatch green chili and a green bell pepper and decided when lunch time came, they would be what I would use to make something. No idea what, just it would start there.

Okay need a protein, wife said there are some left overs. Okay shredded pork, naw just had that. Chicken, ohhhhffff, that is not a good left over, not even worthy of the dogs, into the trash. Open my Keto cabinet. Wild Planet Anchovies, have not had these, I wonder, open, hmmmm, almost exactly like really good sardines. Welp, now committed, open canned fish must be used right away.  Hmm more protein needed, okay we have some grass fed polish sausages from Costco weird but shrugs, grabs one and moves on.

Cut up peppers drop in 1 tbs of the oil from the fish into the pan, chop up peppers and fry them down with one clove of chopped garlic. Now slice sausage and add it to the pan. Fry it a bit. One cup of bone broth and one cup of water go in, bring to simmer. Open produce door in fridge, hmm, ginger, well shit we have polish sausage and anchovies, and south western peppers, screw it lets make this thing ethnically confused. In goes some sliced fresh ginger, fish sauce, liquid aminos now we got Asian going on too. Taste, salt and pepper, needs something, fuck it lets go to Maryland, grabs old bay and hits it with about a half a tsp of that.

Taste, nice, let’s get nutty and add some Italy to the mix. Small hit of pine nuts, 2 oz of half cherry tomatoes and simmer more. Drop in anchovies broken into pieces, man there are a lot of em in that can. Simmer to heat them though, kill heat and wilt in spinach. Planned some crumbled FETA but forgot it and ate it all.

1. The anchovies were better then expected, I think the mackerel from Wild Planet would be better though
2. The Feta would have rocked
3. The Sausage I used was also good but something like andouille or Chef Adel’s Green Chili Habanero would be better

Guys don’t let anything keep you from throwing shit together and seeing what happens. This was to be blunt fricken good, I can and will make it better but forcing myself to use what I have and be creative led to something really cool.