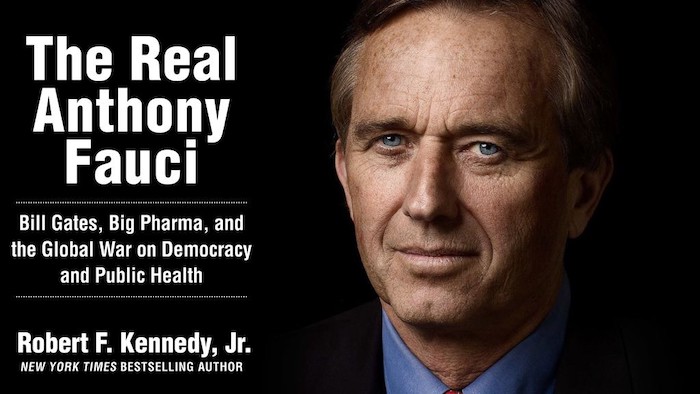 Today’s TSP Amazon Item of the day the book, The Real Anthony Fauci by Robert F. Kennedy Jr.  Right out of the gate I will say a ton of what I have heard in this book so far I reported in real time as it happened.  The wars on HCQ and IVM for one.  The fraudulent “studies” that where designed to fail to discredit HCQ by giving known toxic dose, the medication at late stage near death only, etc.  The push for the Vaxx no matter what, etc.

It is so much more though.  I am sure Robert Kennedy and I would differ on a lot of view points, especially politically.  However, he has done amazing work with this book.  The documentation is meticulous and damning as hell.

There is one particular transcript in it of a dialog between two doctors in the UK doing what as known as a “cochrane review” of observational studies of the use of Ivermectin around the world.  Both Doctors were 100% in agreement that the data was solid that Ivermectin saved lives.  A couple weeks later one of the Doctors backed out and said “more studies were needed”.  When pressed by the first doctor this second doctor flat out admitted he had been told to change his story by people financing his position.

Ironically cochrane reviews were established to prevent such intrusions by industry into public safety policies!

It keeps getting worse the deeper I get into this book, I am only about 1/4th into it but I can already say you need to read it.  Any shred, any scrape of faith you have in the government, watchdog agencies, pharma, etc. will absolutely be murdered by this book.

So at this point I want to say something that should be obvious, while Kennedy is often attacked as a “quack” etc. this book has been on the best sellers list, selling millions of copies since Nov. when it was launched right around Thanksgiving.  Netting the author millions of dollars in royalties, well earned in my view.

The two biggest names to be called out in this book are Fauci (obviously) and Bill Gates.  The well documented accusations against both are not just damning, not just evil, they are in fact criminal.  If Kennedy wrote a book about me, claiming I committed evil and criminal acts and used my name to sell millions of dollars worth of that book, I would sue the living snot out of him.  So why have not Gates and Fauci with far more legal resources done so?

When you put claims in print they are impossible to deny.  When you say “Fauci intentionally rigged trials to get a dangerous drug approved while he rigged others to get safe ones denied to the public”, you can’t go saying, “oh that is not what I meant”.  If any of this book were false it would be lawsuit city.

Perhaps the fact that it is all true along with the fact that RFK Jr. is a trial lawyer and a damn good one, that has prevented any such lawsuits from happening?  Also why haven’t the dutiful media asked Fauci or Gates about these accusations.  Hmm, I think we all know the answers here don’t we?

Please read this book, it is long, it is information dense and you will have to pick at it slowly most likely but it is worth it.  We all need to be informed and Bobby Kennedy’s book is best seen as a true vaccine, a “vaccine against bullshit”.  It won’t just inform you as to how Fauci rigs the game and profits from it at the expense of the public.  No, it will show the formula that he used.  Then you will see the pattern.

This pattern like all such pattern repeats over and over.  In every case where science is invoked behind government regulating bodies the same pattern emerges.  Facts don’t matter, the media says what it is told to say (including Fox News), opposing voices are silenced, we are told the “experts agree” and the force of the state controls everything.

There is only one cure to this disease that is far worse than any virus, and it is education.  This book is the best eduction you can buy on this entire racket, period.

Final note. Due to the length of this book and the fact that I somehow ended up with a butt load of audible credits on my Amazon account I am listening to the audio version of this book vs. reading it.  Dorothy has a hard copy and is reading it.  So we are doing both and discussing it as we go though it.  I just wanted to say two things about the audio.

First, the very first part includes a huge list of names of Dr’s fighting the good fight, publisher notes, copy write stuff, etc.  Literally everything in the book read aloud.  I will admit I skipped a lot of this.  I appreciate the reason behind it but I am not going to remember such things.

Second, the narration is a bit slow for my taste, I found just upping the speed to 1.2x made it a LOT better.

In any event wether on Kindle, Hard Copy or Audible I really recommend you get a copy of The Real Anthony Fauci – By Robert F. Kennedy Jr and use it to really educate yourself as to how things really work in the rhelms we are told are scientific but are clearly anything but.

“Science is to be an error correcting process, not an institution of authority.  The entire purpose of the scientific method is to eliminate authorities using politics, mysticism, greed, etc. to control systems of belief.  Any belief that science is to be seen as an authority to be obeyed, is as unscientific as any belief can be”. ~ Jack Spirko