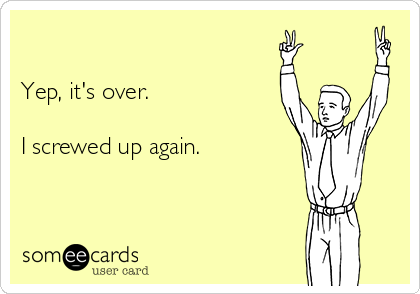 Well, I screwed up guys!  I ended up setting a filter in my email program that was sending all guest interview requests to a folder I had set aside for spam.  Fortunately the saving grace is I didn’t empty it for over 90 days.

We were actually concerned, interview requests had ground to a halt, so last week I put out an open invitation to interviews.  I also reached out to several fan favorites and special guests and said, he get a form filled out and we will have you on.

And do you know what happened?  NOTHING!

So I went into the spam folder and did a search for wufoo (the form manager I use for interviews) and in the words of Penny from Big Ban Theory, “Holy CRAP ON A CRACKER”, there were 26 requests sitting there, some over a month old!

Okay so here is the bad news, 26 weeks at one interview a week is 6 months of shows.  That means for some who filled out the form you could be waiting that long to be on. It also means I am taking the guest form down for a quite a while as we deal with back log.  We may do a few weeks with two interviews to catch up but will make that decision after our coming vacation (which apparently I need badly).

It isn’t a perfect system but it is the best we could do.

The good news?  We have some amazing stuff coming up, like major awesome people and major awesome topics!  It is just going to take awhile.

If you are one of the folks who submitted a form and are going to have to wait a while, I apologize.  But again, man folks do we have an exciting 6 months of guests to look forward to.