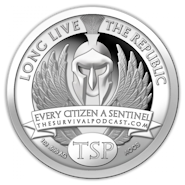 Today I am joined by my good friend Mr. Rob Gray of AOCS and  Mulligan Mint.  Today our discussion revolves around the future of TSP Silver Medallions and we have some very exciting news about that.  Additionally we really focus more on expanding silver’s role in America and around the world as a true currency of choice.

The entire mission of AOCS for as long as I have known Rob has been  to expand the use and role of complimentary currencies and return individual sovereignty for anyone from towns to Indian nations.  Today for instance we are announcing that the Crow Nation has engaged with Mulligan Mint to produce a new silver medallion with plans to set up a bank for their people.

Rob and I have worked long and hard and have some pretty interesting plants to take the silver market to a new level.  We will soon begin work on a new coin series called “The Six Virtues of Liberty” each of the 6 medallions will feature a virtue that is necessary for a citizen to preserve the liberty of the republic.  While we did not reveal the 6 virtues on air today, I will do that here in today’s show notes.  They are…

Think about this friends, how much stronger would our nation be if these were the virtues that we were instilling in ourselves, our children and our fellow citizens?  Join Rob and I today as we discuss how we as partners are going to bring this message, the message of honest money and the message of community value to America.