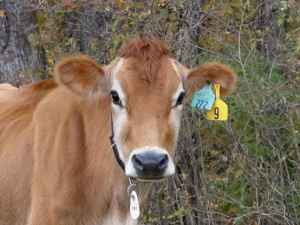 A Happy and Healthy Jersey Cow at the P.A. Bowman Farmstead

Mike Haigwood is currently the manager of  the P.A. Bowen Farmstead a mixed species dairy operation run by Sally Fallon.  Sally Fallon (who will be on TSP next week)  is the co-founder of the Weston A. Price Foundation along with nutritionist Mary G. Enig

Mike grew up in rural Iowa three generations removed from Agriculture. He had an average childhood but always loved the outdoors.  Fast forward, he graduated 1986, tried college but didn’t like it, quit after one semester then started working.

Mike then got a chance to work for a guy who started his own traditional lawn care business as a partner in the company, while short lived it started him down a new path.

Mike then started school at Penn State University in 1990, got married and had a son and then graduated in 1992 with a Bachelor in Horticulture. He then moved to Mosurris working in the Kansas City area as a Landscape Designer for a Garden Center Chain.

With the birth of his daugher and new concerns for nutrition his awakening began.  So in 1995 they moved back to Iowa started their own businesses lawn care, garden produce but ended up closing the business in 97.  In this short time Mike learned a lot about marketing, or the lack of it!

At this point he started homesteading, homeschooling, and following the practices in the book Nourishing Traditions (by Sally Fallon) and began interning in the world of agriculture.  In time that led to “bootlegging raw milk” from their own farm.  While successful they grew tired of the dogma around conventioinal agriculture still present in the Midwest.

So in 2009 they decided to move east and pursue alternative farming practices. He and his wife (Barb) met Sally Fallon at a conference in 2010 and asked if she knew anyone that could use a management team for their farm.  Her response was, “send me your resume” and now today the whole family is working on Sally’s Farm P.A. Bowen Farmstead.