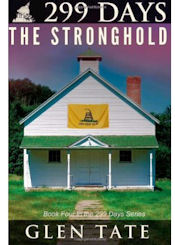 Today you get an opportunity to win a signed proof edition of the third and forth books in the 299 Days series. Not just by Glen but by me as well, make sure to pay attention to how to do that in today’s episode.

Glen Tate is the author of the ten-book prepper novel series “299 Days” published by Prepper Press. The books describe an average guy who prepares for, and lives through, a partial collapse of the United States.

Glen joins us today to discuss the plot lines of books three and four in the 299 Days book series.  Today we discuss what an initial collapse would look like and why Glen feels it is inevitable based on his close up insider seat within the walls of government.

We also discuss the newest changes Glen has made in his personal life, progress on “flipping his spouse” and the reality that many people within government are becoming receptive to both TSP and the message of 299 days.