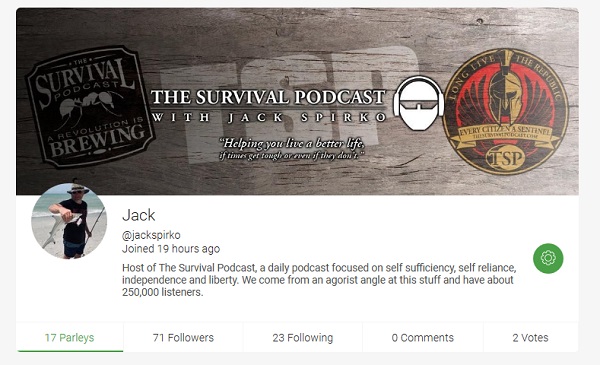 Come Join Me on Parler

I want to start out with what this post isn’t.  This is not a post saying “hey Parler, you suck”.  Rather so far I am enjoying Parler and I want it to succeed.  So these are things I think they can and should do better.  I am also doing this post because yesterday I criticized something they are doing, in response one of their people gave me a great answer.

Also Parlers official account is following me and does respond to me at times.  I know some of you may be like, well of course they do, you are a well known podcaster.  Yea, but not to Parler I am not, I am just one of many on the platform.  Since lightly promoting it a bit to you guys I have grown to just under 900 followers in about a month.  That may seem like a lot but it isn’t.  There are accounts on Parler with hundreds of thousands of followers, 900 is not a big deal.  The fact that they even respond to me is huge in my opinion.  It shows they want to serve their users better.

Let me start out with what I really love about Parler so far.

Things They Can and Should Do Better

Unfair Criticism of Parler – It seems only right I include this, as some of this stuff is bullshit.

Anyway this post is not a great piece of literature, I am sure it is rife with typos and bluntly I don’t have time to proof read today.  However it is hopefully going to be considered by the team at Parler.  I know you guys don’t know me but before I was a podcaster I was a marketer for about a decade and helped some of the largest brands in the world, including Trump.  Yes really.  And you want to know how I got Trump as a client all the way back in 2006, I wrote and article saying his blog sucked.  His team fired back, I countered and two days later they hired me as a consultant, true story.  I can show you the internet archive of the exchange if you want.

What I am saying makes sense and it will absolutely accelerate Parler’s growth if they give it a shot.  Anyone from Parler’s team, please consider it if you made it this far.  Oh and Parler, if you don’t take a single of my suggestions, I won’t hate on you for it or anything.  You have no reason to listen to me, save one, I’m right.  Arrogant?  Nope just confident, like I said I have been in this game a very long time now.

Everyone else if you are not on Parler consider joining me there, give it a shot.  It is easy to criticize but as I have said for 12 years now, focus on solutions not problems.  The chief criticism of Parler is there is not enough diversity of thought, well that is something you can either bitch about or do something about.

P.S. – If you don’t use social media, why’d you even read this?  Don’t go bitching about social media as a thing in and of itself to me.  I respect anyone who says, social media isn’t for me but this article was not for you.  Don’t feel called out in the end where I said, ” The chief criticism of Parler is there is not enough diversity of thought, well that is something you can either bitch about or do something about.”  This applies to those using social media in some way already, not you.  It makes me sad that I know I need to say this.