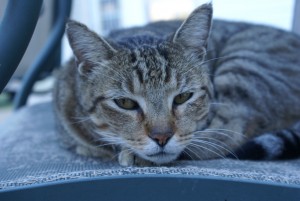 We lost a good long term member of the crew today.  Ralph the cat passed on to the other side in our house.  He went as good as any of us can hope to.  On his own terms, a VERY old man while being pet by Dorothy.  How old?  We don’t exactly know but we first found him in 1996 and he was at least four years old at that time.  By that estimate which might be low he was 23.

Of those years we had 19 good ones with him.  He lasted though six houses and apartments, moved from Texas to Pennsylvania, back to Texas, up to Arkansas and back to Texas one more time.  He lived his last few years in real happiness.  He had three acres to patrol and in is old age senility probably didn’t realize it was the dogs that kept all other competitors away.

He killed many a mouse in his day.  He was a fighter and though declawed by a previous owner held his own, though we had to deal with a few bad battle wounds a time or three.  To drive home how long this guy was with us, his death was preceeded by the following pet contemporaries, Alice One (cat), Victor (cat), Lakota (Siberian Husky) and Blackie (Black Lab Mix).  We are talking almost two decades folks.

The place won’t be the same without him.  I will miss the old man, but again not many of us get to die so well loved, cared for and under our own terms at such an old age.  He was looking thin and you could tell he was on his way out for quite a few months, but even just a few days ago he was eating like a king, still able to jump up onto the chairs and tables and was in pretty good spirits.

We shall miss you buddy!  Hope you are enjoying shrimp on the other side!

A note of advice, if you love your pets in this day and age where everyone has a camera and video camera on their phones, take lots of pictures and videos.   Because Dorothy thought to grab the camera one night, we will also have this video from back in 2009 when our buddy was still in pretty prime shape.

Note my gut, I wasn’t in such great shape at the time. So he even outlasted my gut!