He’s always loved computers and programming, but didn’t want to make a hobby into a career in college. As chance would have it though, in 2014 Eric received a job offer he couldn’t refuse in computer/network security. Now he works his own schedule, breaking into computers and networks before the black hat hackers do.

In his spare time he builds automation systems out of cheap hardware to run his chicken coop, bee hive, moisture sensors, waterers, temperature sensors, feed stations, and anything else he can hook wires to.

He has a ton of other interests too such as backpacking (JMT this year!), keeping bees, programming, ham radio, model rockets, aluminum forging, anda billion other things.

Eric Joins Us Today to Discuss 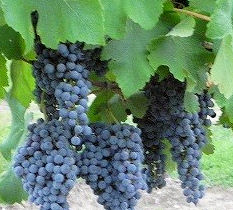 It is a heavy and regular producer that is resistant to Pierce Disease and mildew. The Black Spanish grape is often considered the “best” variety for growing in the deep South due to its unparalleled disease resistance.

The wine produced by the Black Spanish is similar to a Merlot or Cabernet wine. Ripens August to September and benefits from cane pruning.

Find this plant and more at BobWellsNursery.com – Bob Wells Nursery specializes in anything edible: Fruit trees, Berry Plants, Nut Trees, as well as the hard to find Specialty Trees.