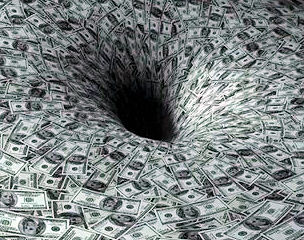 The Current Economy is a Monetary Black Hole!

I feel it is becoming more clear that our pending economic collapse isn’t something that will happen but something that is happening right in front of us.  Much as people in the Balkans felt no war was coming while mortars were placed in the hills around their cities we continue to think our economic woes are just the downside of a cycle.

There are signs and indications everywhere that we are not headed for a collapse but in one as we speak.  A long collapse which could have times that appear to look like recovery all while we still continuously drop toward the inevitable.

Many people think somehow we can “get our fiscal house in order” or simply “cut wasteful spending”, while I am of course for such things at this point it simply won’t matter.  The mathematics alone point to a single reality.  The current economy is a monetary black hole and sadly I fear we are soon to approach the event horizon.