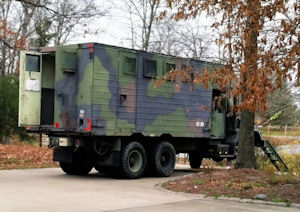 Wade will talk to us about different ideas like: new vehicles, RVs, old vehicles, and most importantly military vehicles and trailers.  Wades bug out location is approximately 1200 west of his current location so he has put a lot of thought into getting there and have come up with two solutions:  Fast and agile or slow and tough.  My personal choices are a 2010 Ford F-150 Raptor and a 1971 AM General XM820.

Join Wade and I today as we Discuss…