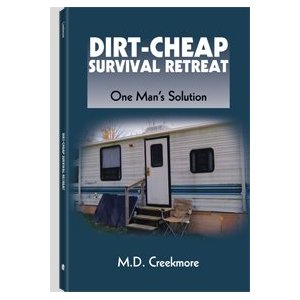 Today we are going to take a look at setting up a BOL on the cheap or at least inexpensively.  There are a ton of ways to accomplish this and land is still one of the best investments a person can make.

I also do a brief review today of a great resource for setting up that low cost retreat, it is called, The Dirt Cheap Survival Retreat by M.D. Creekmore, author of The Survivalist Blog.

If you have never read M.D. Blog take a look at it today because he has some great information and insights on modern survival living.

Join me today as I discuss…