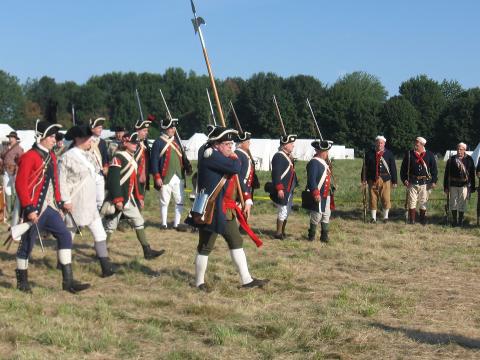 The 5th CR In Drill.

It was formed as a family group, encouraging women and children to participate as well. This gives us the ability to teach about other aspects of colonial life beyond the military. A good number of our members have been a part of this regiment for many years, some members have been active with us since 1974, when citizens first gathered to re-form the Fifth Connecticut Regiment.

The Fifth Connecticut Regiment was initially formed in May 1775, when the Connecticut legislature created six regiments in response to the hostilities begun at Lexington and Concord. The regiment was then composed almost entirely from officers and men of Fairfield County.

In June 1775, the 5th was sent briefly to New York City, but by July began its northward trek along the Hudson River with town other Connecticut Regiments to invade Canada and secure Lakes George and Champlain. The regiment received its first hostile fire from a force of Indians just prior to laying siege to the British fort at St. John’s.

Together with New York troops they engaged in a long siege that eventually led to the capture of Fort St. John in early November. Brigaded under General David Wooster, the 5th then joined the van of American forces under General Richard Montgomery and marched to Canada ten days later.  These and other exploits form the basis for many of the units reenactments.