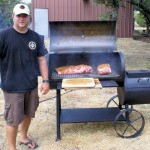 Side Box Smokers are Extremely Flexible.

Today is Monday and that usually means a listener feedback show.  Here is the deal though, I am in a great mood today and additionally off to a late start.  Monday shows take a while so I am moving it till Monday and frankly some of the stuff the clowns are doing this week, will ruin my mood.  So I thought why not a fun subject we have never covered before.  Grilling!

The grill is really an incredible piece of daily living equipment and a great piece of prepper gear.  Grilling is actually one of the easiest and most efficient ways to cook, but a little bit of learned skill and a few tricks of the trade will give better results.  I would estimate I cook dinner on a grill or smoker 90% of the time, and I mean year round.

Today I will be discussing mostly grills and side box style smokers with a few other options tossed in.  I will tell you what to look for quality wise, how to avoid expensive mistakes, where to never go cheap and how to get the most out of your equipment.