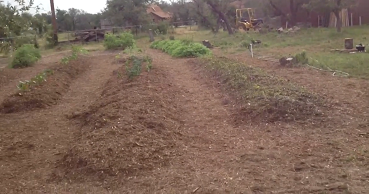 I figured now would be a good time to discuss this subject as it applies to two major projects underway at the Spirko homestead.  Of course we just recently completed the contour based wood core garden beds at our first workshop.  Those who attended also got to see the area that will be our “showcase urban forest garden”, an area of 2700-3500 square feet depending on what we actually use of it.

The work involved in establishment of these two systems is dramatically different.  One required a lot of initial inputs, mulch, wood cores, heavy equipment, fungal and bacterial inoculation, organic fertilizer  and lots of manual labor.  The result is pretty much a turn key system.  While it will take a year to fully mature, it is a long term and very stable system.

The new project, the forest garden will be remarkably low input.  We did dig out one hole for a garden pond based out of a stock tank and a short trench to connect it to one upgrade.  But the work could have been done in a day with a shovel by one person.

Today I will contrast these two systems and discuss the permaculture concept of an “energy audit” and why it is critical to our long tern sustainability.  Specifically if the SHTF, we will immediately go into a scenario where what comes out must at least equal what we put in.  Today this is measured in money with no concept of the damage done to the system long term.  Tomorrow that likely won’t be an option.