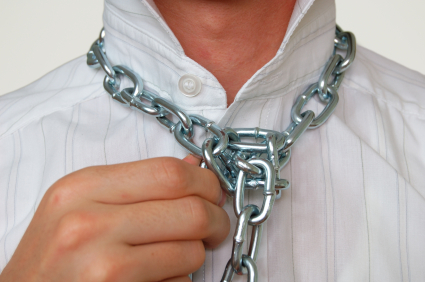 If You Desire Freedom, Stop Polishing Your Chains

I am going to do something I have never done before, quote Joseph Stalin,

The point is that Marxism and anarchism are built up on entirely different principles, in spite of the fact that both come into the arena of the struggle under the flag of socialism.

The cornerstone of anarchism is the individual, whose emancipation, according to its tenets, is the principal condition for the emancipation of the masses, the collective body.

That is to say, according to the tenets of Marxism, the emancipation of the individual is impossible until the masses are emancipated. Accordingly, its slogan is: “Everything for the masses.”

About the only thing I disagree with here is that anarchism is “under the flag of socialism” in a true anarchy words like capitalism, socialism and communism are adjectives, not systems of control.  We can’t expect that one of the greatest tyrants of history would understand such things though.

It does come down to this, and I would like to replace the word marxism in this quote with statism and state it myself with far less words as follows…

This I believe is your choice, a belief that people as a whole may be declared free or people as individuals must declare themselves free.