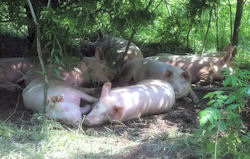 A Pigs Life is a Good One at Simpson Family Farm

Darby Simpson is the owner of Simpson Family Farm, a 7th generation family farm (1828-present) and a lifelong Indiana resident Darby grew up not realy learning anything about farming, became a mechanical engineer.

He worked in the engineering field from 1994-2010.  Began small scale pastured based meat farming (Joel Salatin style) in 2007.  Grew the business while continuing to work off farm full time. In 2010 like many Americans he lost his job due to the recession and took the farm full time.  The farm now provides his family with a full time income.

Darby’s family began homeschooling in 2011, and his family is now together everyday.   In his words.

“We have a blessed life.  I feel like Neo in the Matrix: I’ve unplugged from what society told me my life was supposed to look like – public school, college, cubical, fast food lifestyle.”

Today he joins us to discuss small scale, beyond organic production of pastured based meats & eggs (beef, pork, chicken, turkey, eggs) for the homesteader or for someone looking to begin their own business (full or part time).