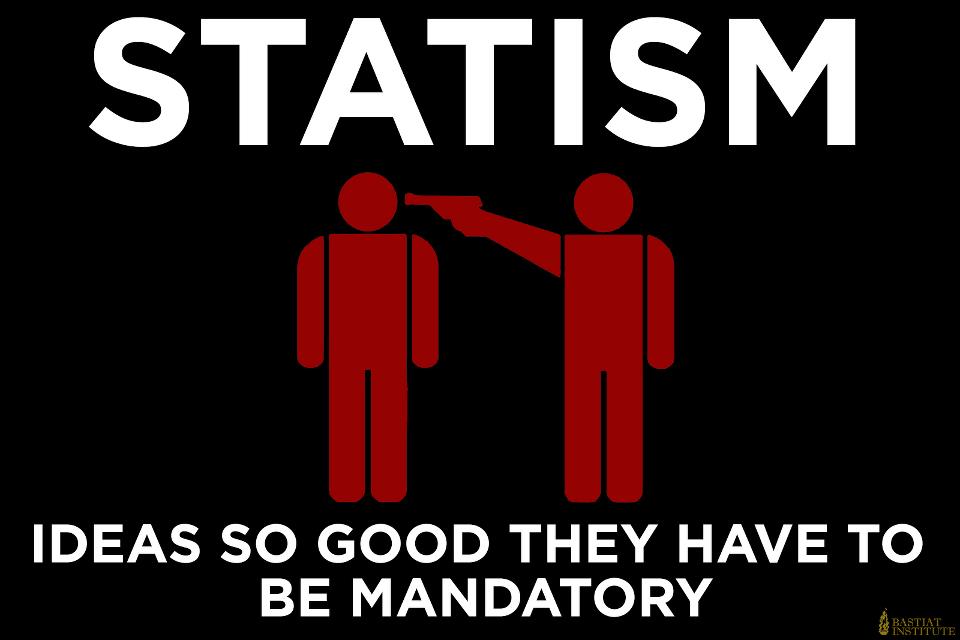 A Law is Merely the Threat of Violence at the Point of a Gun.

Recently I have responded to those who say that vaccines should be mandatory with a simple statement.  That is that if you are for mandatory vaccines you are for enforcing the injecting of a drug into a person’s body against their wishes, via the threat of violence at the point of a gun.

When I said that I was told that I was “spreading fear and hysteria”  by “conjuring up images of armed thugs forcing people to be vaccinated”.

The truth is I am conjuring nothing…

Conjuring – Noun – The performance of tricks that are seemingly magical, typically involving sleight of hand.

There is no trickery in my statement.  Let us see if we can shelve vaccines for this discussion.  My contention is simply this, any law is only a law if it is backed up with force.  Those who do not submit to the law will be met with force, should those who are met with force resist further, the force will be escalated until compliance is achieved.

Anything short of that isn’t a LAW and it isn’t MANDATORY it is a recommendation.  A law means it will be enFORCED and enforcement requires FORCE.

It is also a fact that in the end, when people refuse to comply with any law, it is armed men who do the enforcing.  This isn’t always bad, if you murder someone, if you rape someone, if you try to kill someone, if you assault someone, frankly I want armed me to arrest you and see that you meet with justice.  I think 99% of people feel the same way about that.

So no matter what the law you want passed might be. if it either requires or prohibits any behavior we have the same dynamic at play.  Just like when a man in New York sold loose cigarettes and refused to comply with being arrested for such a non violent and insignificant act.  His refusal to comply was met with violence and said violence resulted in his death.

I for one do not believe the officer intended to kill that man.  Yet in the end multiple armed men tackled and restrained a man, using the threat of violence at the point of a gun because he broke well, a tax law.  People were shocked but guys and gals that is what a LAW means.  In the end if you fail to comply you are forced to comply and that is done by men with guns.

I am not suggesting you change your position on any law here or on any issue.  No at this time all I would like you to do is accept that when a person says, “X should be mandatory” or “there ought to be a law restricting Y”, what they are in fact saying is it also needs to be enforced by the State via the threat of violence at the point of a gun.

The lone exception would be laws repealing existing laws.  Such a decriminalizing marijuana or deregulation of say home grown or produced food products.   In such cases what is happening is the removal of the threat of violence.

In all other cases though any law or anything you deem “mandatory” is only a law and only mandatory if people will be forced to obey it.

Do you disagree?  If so tell me how we can have a law that means anything without enforcement?  Defend your position with logic, not by calling me names or asking me something stupid like if I have a degree in law.

Now if you are going to say that we can do this simply with fines, before you do let me simply ask you, what happens when I don’t pay the fine?  In the end if it is a law, and it has any meaning as such; failure to comply is met by armed men who force compliance.  Ask any honest law enforcement officer, he will tell you this is absolutely the truth.

All I am suggesting here is every time you think “there should be a law”, you consider what you are actually saying before you convince yourself it is a good idea.

Now again there are certain behaviors I myself would be willing to personally use violence to prevent.  I am also aware of the fact that if I pay someone to assault you, I am also guilty of the assault.  Most people also agree with this.  Using a proxy to carry out a behavior doesn’t absolve the party that instigated the behavior.

So when someone says there should be a law, my first question to myself is would I be willing to personally use the threat of violence to enforce this law.  It is only a fair question because if I support this law, I know my proxies will do so.  When I answer, yes I would, I also require myself to examine that position for quite a while, to be sure excessive emotions aren’t fueling the response.  Anger and fear of course being the two that most often lead to an irrational answer.

Again if anyone finds my position here to be fear mongering, inaccurate, etc.  Please defend the counter argument I would love to hear it.

On a final note, please stay out of the weeds in this discussion.  Notice I didn’t take a position here on any law, regulation or issue.  I have not said what I think should or should not be illegal.  I have simply stated what the words law and mandatory mean when they come from the State.